Chances are, when you think of Kansas City, Missouri, a thriving Latino community is not the first thing that comes to mind. But there is one, and it’s been there a long time. Just ask Enrique A. Chaurand. 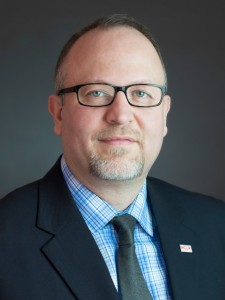 The deputy vice president of integrated marketing and events for the National Council of La Raza (NCLR) can trace his family’s Kansas City roots back to 1915, and like many immigrants new to the United States, his family came looking for work. Kansas City was the place to be. The Pacific Railroad line that eventually formed the East-West connection changed the trajectory of development for the US Midwest, and created many jobs in the process.

Chaurand has always turned to the strength and resilience of his family for inspiration, and they provide a lot to draw from. Take the story of his grandfather, Agustin Medina, for example. Once a popular soccer player in Mexico, he made his way to Kansas City. While soccer is now easily one of the most popular sports in the US, that certainty wasn’t the case when Chaurand’s grandfather arrived. He ended up working in a meatpacking facility to support his family. Eventually, he went on to open a restaurant and tortilleria, El Taquito, now the oldest operating restaurant and tortilleria in Kansas City.

“Over and over again I learned from my family that there is so much opportunity in the United States and you should never take it for granted,” the VP says.

It was impossible for Chaurand’s family history not to influence the field he would eventually enter and the work he would eventually do. As a matter of fact, his first exposure to Latino advocacy organization NCLR was thanks to his uncle Cris Medina, who has spent the last 30 years as executive director of Kansas City’s Guadalupe Center, the longest continuously operating organization serving Latinos. At 16, attending after school and cultural programs, Chaurand was already hearing about NCLR.

“I’m lucky that my culture was so deeply instilled in me by my parents,” Chaurand says. “Initially, I didn’t understand the depth and breadth of the work NCLR did, but as I got older, I really came to see the impact of their work.”

The depth and breadth of NCLR’s work is impressive. Founded in 1968, the non-partisan, nonprofit organization focuses on civil rights, the economy, education, health, immigration, voting, and youth, all as it relates to Latinos.  To stay relevant, the organization has changed with the times and has been nimble because it’s had to.

One thing has remained the same: The mission of NCLR is to improve the lives of Latinos in the United States, whether that’s through housing or immigration reform.

“We’re always looking down the road. What’s going to be impacting us five, 10, 15 years from now?” Chaurand asks. “We want to make a long-term impact, and part of that has been serving as a breeding ground for up-and -coming leaders. In 2018, we’ll be celebrating our 50th anniversary, and it’s providing an opportunity to reflect. We’re thinking about what we’ve done in the last 48 years and how we can continue to have an impact.”

It should come as no surprise that the last few years have seen NCLR focus on immigration reform, or a lack thereof. While President Obama has made a series of executive actions on immigration and passed Deferred Action for Childhood Arrivals (DACA), which enables certain undocumented immigrants who entered the country before their 16th birthday to receive a renewable two-year work permit and exemption from deportation, he’s also deported more people than any president in US history.

As we move into the presidential election, immigration will only become more of a contentious topic, especially if Donald Trump continues to be given a platform to disseminate everything from half-truths to outright hate speech.

NCLR wants to tackle a lot in the coming months, including health care. According to the Pew Charitable Trusts, one year after open enrollment for the Affordable Care Act began, one in four Latinos does not have health insurance.

People do have power to influence immigration reform, access to health care, and a myriad of other areas that impact the Latino community, and NCLR wants Latinos to flex that power.

“As we move into the election, we’re focusing on civic engagement,” Chaurand says. “We’re non-partisan, but for us, it’s about getting people to exercise their right to vote. Latinos have the ability to impact elections in a big way, so let’s show them how.”

New Report: The Latino Contribution to US Economic Dynamism

Claudia Ibarra: “Never Give Up”