To say that George Calienes is well versed in international business would be an understatement. Before becoming senior vice president of Latin American operations for heating, ventilation, and air conditioning (HVAC) giant McQuay International, a Daikin Industries subsidiary, he worked for Mitsubishi Electric, an experience that plunged him into the international business pool feet first.

So imagine this: you’re a young man of 25 who’s been hired by Mitsubishi, a company entering the US market for the first time. Not only that, but they’re also making the transition from heating and ventilation to air conditioning. Things are changing rapidly and you’re in the middle of it; you can simply survive or prove that you’re cut out for conducting business abroad. Calienes ended up thriving, but it wasn’t easy.

“I began traveling to Japan very young and it opened up a new world to me in terms of culture, business practices, food, and language,” Calienes says. “My first business trip served as my ‘how to’ when it came to conducting myself on an international stage. Activities like booking flights, gaining visas, navigating local trains, and figuring out public transportation were all intimidating.”

Initially, Calienes was unaware that his first business trip abroad was doubling as a cultural rite of passage, one in which his employers were literally testing his ability to adapt in a completely unfamiliar setting. Upon landing in Tokyo, he was given the assignment of traveling to Mitsubishi’s major factory in the city of Shizouka, which required him to find the bus station that would take him to the train station that would eventually lead him to Shizouka. If he made it, someone from the company would be waiting for him at the Shizouka train station. 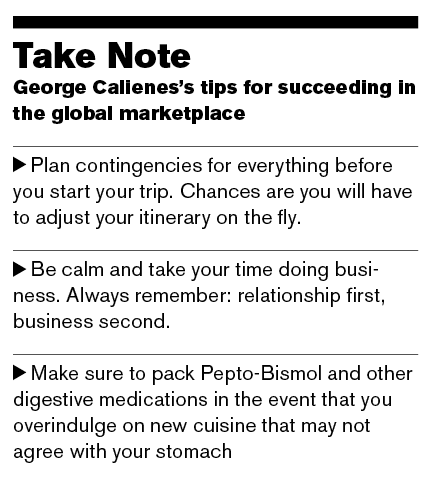 “At the time, there were no English signs in Japan and I had to interpret the Kanji symbols and ask locals for directions. Thousands of people were rushing by me at the Tokyo train station. It was crazy,” Calienes says. “This was a major cultural learning experience for me and quite challenging, as Mitsubishi was not used to the US way of doing business and I was not accustomed to Japanese culture.”

Eventually Calienes found a young girl who spoke English and she was able to direct him to the bullet train. The station names were also in Japanese, so Calienes had to make sure to follow the girl’s advice and get off at the fifth station, but he was so jet lagged that he fell asleep on the train, which travels at close to 200 mile per hour. “I woke up in a panic not knowing how many stops had gone by, but in the end I made it to the right station and someone from the company was there to greet me. I had passed my first test,” Calienes says.

Needless to say, his new role with McQuay isn’t quite as intense, but the trial by fire approach taught Calienes many valuable lessons about being able to adjust in a new environment; it taught him the importance of thinking on his feet and broadening his decidedly American perspective. The senior vice president of Latin American operations didn’t realize how deeply ingrained his business approach was until he did business in Japan and realized that the American way of doing things can sometimes come across as cold and abrupt.

“In general, doing business on an international scale is a big challenge, especially when you are brought up in the US and work in the domestic North American market,” Calienes says. “You have to adapt to local customs, not think locals will adapt to your policies and practices, which may be normal in the US but not in international settings. For example, there might be less focus on contracts and lawyers and more focus on a handshake and keeping your word. These are the types of things you have to learn to succeed.”