Simply changing the design of an office can have a powerful effect on a business. Just ask Michael Huaco, senior vice president and global real estate head at McKesson Corporation, about how he helped drive the company’s transition toward sustainability and progressive workplace environments. Huaco built a leading-edge, diverse global team, and the team started advocating for sustainability and openness after they redefined the function of the real estate department.

Huaco has led a transformational initiative to create a true shared-services model for McKesson real estate. Adopting an end-to-end model focused on the total cost of ownership and sustainability of the company’s facilities has driven greater value and lowered the cost structure. Partnering with other shared services, like HR and IT, has led to much better outcomes and strategies in the workplace function.

“Any time we do something new, whether it’s an office building, warehouse, or medical facility, our goal is to at least design it to a LEED standard—with the benefit of lower energy costs and a nicer environment—but not all spaces will or need to be certified,” Huaco notes.

And McKesson’s sustainability effort isn’t limited to LEED. They’re also implementing a solar energy program and an energy-lighting retrofit program. Plus, the company uses a special dashboard to aggregate sustainability-related data, so they can share the data in their annual report.

The real estate team not only lowers costs through its sustainability efforts, but also adds value by making its offices attractive to high-quality employees. Huaco says that he and his team try to answer the question, “How can we create an environment to be the employer of choice in a market where we attract and retain the best talent?”

One way of making the offices appealing is pursuing WELL Building certification, a standard that promotes employees’ health. WELL buildings might include natural light and air, nutritious food in the cafeteria, and an on-site gym. “If we’re a healthcare company, we should have healthy employees,” Huaco reasons. 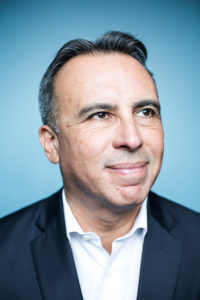 “As a healthcare company, our facilities should promote health and well-being. We create an environment to be the employer of choice in a market where we attract and retain the best talent.”

McKesson’s Richmond, Virginia, office was the first to be WELL certified, and the Dallas office is presently applying for certification. Maintaining high standards for employee health improves McKesson’s bottom line, but that’s not their only motivation. “It improves everything, from your mental state to lowering your insurance premiums to productivity,” Huaco says. “But we also think it’s just the right thing to do.”

Another feature of McKesson’s facilities that attracts top talent is open offices. While conventional wisdom suggests that millennials are most drawn to open offices, Huaco believes that people of all ages can reap the benefits. He favors open designs because they lead to greater collaboration, which boosts employee engagement and ultimately produces more innovation. “Collaboration and engagement are a means to an end. That end is innovation,” he says.

Open offices facilitate collaboration by allowing coworkers to gather anywhere. “If you want to work in the cafeteria, if you want to sit on the couch, if you want to work with your teams on different floors, you can basically pick up and move your laptop anywhere,” Huaco says. And it’s not just employee mobility that encourages collaboration—it’s also the common spaces that facilitate more casual interactions. Before open-office plans were implemented, McKesson employees might work in the same office for fifteen years without meeting each other. Now, they can see each other in the cafeteria or the gym.

“You’re much more inclined to have a nice conversation with somebody when it’s face to face in a casual environment than you are by firing off an email,” Huaco says. This relationship building among employees leads to unstructured conversations, professional collaboration, and, in turn, innovation.

Huaco feels confident that McKesson’s office designs have contributed to a culture of innovation because of the positive comments he’s received from employees. His team collects surveys to evaluate the success of their office designs. “We’ve had tremendous feedback,” Huaco says. He notes that certain employees come to McKesson from substandard work environments with minimal parking, and that those employees in particular can reach greater heights at McKesson.

Despite the many benefits, transitioning from traditional offices to open offices wasn’t always easy, Huaco says. Some of McKesson’s employees had worked for the company for up to thirty years, and they felt apprehensive about the change. “A lot of people who had offices no longer had offices, and had to work in an open environment. That’s really hard for a lot of folks. It would be hard for me,” Huaco says.

He and his team helped ease employees’ anxiety by hosting town halls and encouraging employees to form councils on open-office etiquette. By communicating frequently, Huaco helped employees embrace the new design. “You come out on the other end, you look back, and you go, ‘I don’t miss [the traditional office] at all,” Huaco says.

Today, most McKesson employees are thriving in the company’s facilities. “It creates an environment that’s just much more collegial and much more efficient,” Huaco says of his team’s various redesign efforts. “And those are the things that make people happier—giving them more than what they had.”

In addition to his daily professional responsibilities, Michael Huaco mentors at least three interns every year. He learns as much from them as they learn from him. “It gives me a way to learn about new advents in social media or other areas that could be used in my day-to-day business,” Huaco explains. He also sees mentoring programs as an agent for positive change by helping young people start the next chapter of their lives.

Huaco himself has benefited from mentoring in his career. For example, he cultivated a productive relationship with Dan Garcia, a board member and senior executive at Kaiser Permanente. “He taught me the value of patience, the value of sticking to your guns,” Huaco says. “He was somebody I really respected and aspired to be.”

Huaco has also learned from Jorge Figueredo, the current head of HR at McKesson. In fact, Figueredo inspired Huaco to take the job in the first place. “He’s a very senior executive at the company, and seeing him as a role model was a positive experience that helped influence my decision to come to McKesson,” he says.

Huaco believes that mentorship has a special significance for Hispanic people. “Any time you have access to folks that can influence you, help you get a job, or just talk to about a common experience you had growing up greatly helps,” he says. “I think it’s incumbent upon folks that are Hispanic to do that for their own community.”

Turner Construction would like to congratulate Mike Huaco on his leadership achievements and instrumental forward thinking. Mr. Huaco is extremely influential in fostering a partnership that allows Turner to integrate with the business leads and stakeholder teams throughout North America. Turner Construction specializes in corporate office construction, interiors, medical office buildings, and industrial distribution facilities throughout North America.