Alexander Arrieta on J.D. Power’s international move and the importance of a culturally competent HR strategy*

When Alexander Arrieta joined J.D. Power in 2009, it was during a period of internal change for the company—as well as the recession. In this fluid situation, Arrieta took on a critical leadership role as J.D. Power worked to restructure its business operations. 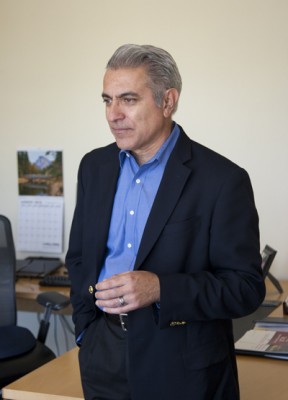 Since then, Arrieta’s focus has intensified on the company’s international concerns, specifically in China and Latin America. The shift makes sense, since 40 percent of J.D. Power’s business comes from outside the United States. Still, managing across cultures and time zones to bring an executive committee-level vision to every corner of J.D. Power’s expansive empire doesn’t happen overnight. Arrieta speaks to HE about transforming the company from within.

Hispanic Executive: HR must get especially complicated with an organization that crosses cultural and national boundaries, and yet you’ve introduced some really successful programs. What philosophies have guided the global talent initiatives you’ve implemented?
Alexander Arrieta: There are a couple of actions that stand out. One of the initial initiatives that I drove was really looking at our current organization structure and our talent alignment against that.

What I recognized pretty quickly was that we weren’t structured optimally to meet where our industry and market research and analytics was heading—and, frankly, where our clients were evolving to. Especially in terms of what they would be asking from us, in terms of analytics that would help improve ROI and customer
experience.

So, I undertook a pretty significant organization assessment with our president and our leadership team. I did that in year one, but—candidly—in the six years I’ve been here, we’ve done that every year. We’ve done it with the expectation that not every year has the significant upheaval that years one and two had, but it’s an opportunity to do an organization and talent calibration and make some changes.

As a result, we have a global automotive business, for example, that before this change was largely US-centric. We had an international division at the time, and the leaders of it were essentially competing against each other and, frankly, kind of cannibalizing revenue. And so we aligned our automotive discipline under one leader.

We totally globalized it under regional leadership in China, Singapore, Japan, Europe, and Latin America. As a result, our automotive business has grown double digits for the last four years.

The second thing has been around what I would call robust deep-dive talent reviews. We’re now on a really good cadence where we assess our talent regularly to figure out who is high potential, who needs a development assignment, et cetera.

Where this is really becoming important for us is in China, where we’re continuing to grow significantly. Just this past July, I led a talent review with our HR team and business leaders in China , and we spent some significant time drilling down on where the business is going, what the business model looked like, how we align our talent accordingly, and what we wanted our succession to look like.

We’ve had to be very involved, very prescriptive, and very intentional with our talent-review initiatives. As a result of working that way, we’ve seen our China business grow from around $15 million in business when I started six years ago to $60 million this year, and we’re going to do $100 million in the next two or three years. It’s a good growth story there.

Can you talk about how the thinking that guides the growth in a younger, newer market like China compares to the thinking that guides your operations in more establisheds market?
We’ve had to be fairly nuanced. When we look at rolling out a talent strategy in China versus Europe, the US, and Latin America, we can’t take a cookie-cutter approach. There are some talent strategy platforms that we can agree on and that will hold true regardless of where we’re operating, but then there are some nuances that we have to factor in for fairly significant cultural differences.

For example, within China, we have a leadership-development program called Leadership Essentials that really puts our leaders through a practical, hands-on course where they learn our leadership competencies. One of the things we take for granted in the US is how leaders respond to us asking them to be assertive and decisive, and to speak up. Those competencies are fairly prevalent in the US.

When we rolled this out in China, the differences between American culture and Chinese crystallized for me around one of our competencies called “Speak the Truth.” If an employee was in a meeting with a manager and disagreed with an idea the manager was presenting, he was incredibly unlikely to voice that disagreement in the meeting out of respect for the manager. It made me wonder if that meant that meetings were going to be a waste of time if you had to wait until afterwards to constructively disagree. So we had a real teachable moment there for our team.

But it was a also good reminder of how, when you’re developing global leadership programs, you really have to be tuned into the extra time, training, and education that might be required based on where you are operating in the world. You can’t just take something developed in the US, rubber-stamp it, and implement it in China. We ended up having some really good dialogue with me telling our senior leaders there, ‘We very much want you to speak up. We very much want you to have a point of view, push back, and have a constructive dialogue.”

You have a vision for J.D. Power that sounds like a lot of moving parts in a lot of different places. How do you present your vision to your colleagues in the company’s Executive Committee?
I’ve always believed that it’s important to lead from a business perspective first. I like to think first about what’s going to move the needle on revenue, what’s going to increase our net operating income, and then consider the talent initiative that’s going to drive that.

When it comes to a global talent initiative that I want to roll out, I’m talking with my peers on the executive committee. I’ll sit with them one- on-one and present the initiatives I’m thinking of rolling out. Maybe it’s a global restructuring, maybe it’s an annual talent review process or a new leadership essentials program, but I sit with each EC member and talk through it with them.

On one hand, I’m leading the company’s talent and human-capital planning. On the other hand, we’re talking about things that you can’t just talk to the president about unless you have developed respect and credibility through a track record of getting things done. With a good team working with me, I’ve been fortunate, but I’ve been able to do that by being candid and by showing that I have an understanding of where we’re going as a business.

One of the competencies I developed earlier in my career has always stuck with me: It’s called “helicopter ability,” and it speaks to a leader’s ability to function at the 30,000-foot level and be able to develop a strategy, and then to get low and execute. It’s hard to be an effective leader and gain credibility if you can’t do both well. I’m really fortunate to have access to situations—from our president’s level down to managers and directors—where I can have the collaboration that’s required to function at both levels.