After all, he’s launched three successful sustainable business ventures based on energy-efficient buildings that save people money—and help the environment.

Larry Madrid started his own business, Madrid Engineering Group, Inc., nearly 20 years ago. Over the years Madrid, founder and president, grew the company to employ 50 people; this year he suspects they’ll reach $7 million in business. It was precisely this growth, and the subsequent need for larger office space, that presented Madrid with two additional business opportunities.

As a geotechnical engineer in Florida, Madrid spent the vast majority of his career carving out his niche as a sinkhole expert. “I’ve spent my career making sure the foundations of buildings are stable,” Madrid adds. It wasn’t until he needed to build a new facility that memories of touring a passive solar house on a college field trip came flooding back. Moved by a structure that was both beautiful and energy efficient, Madrid had vowed 30 years prior that if the situation ever presented itself, he’d abide by the same design principles.

Three years ago, he built Madrid Engineering Group’s current office. He designed the 4,500-square-foot main office to be LEED compliant. For the first two years, Madrid monitored the building’s energy costs: The main office’s electric bills were $425 a month, less than half of their previous rented office building. “But, we weren’t done. We put 113 solar panels on the roof, which generated $450 of electricity each month,” he says.

Because they were generating solar energy during the hottest parts of the day, they were able to reduce their peak demand, which netted another $150 a month that Madrid wasn’t expecting. “It turned out to be fabulously successful for us. The system will pay itself off in record time and we had the chance to learn more about solar [power],” Madrid adds. 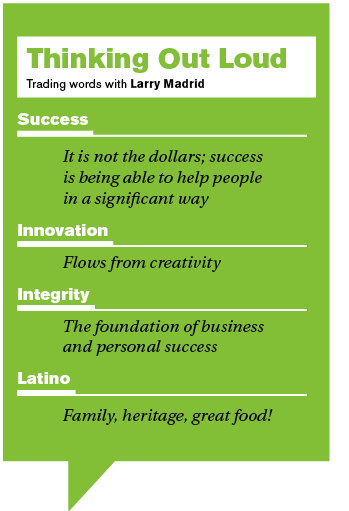 Madrid has since formed Greenovative Design and Engineering, LLC. The purpose of the company is to design and evaluate buildings and infrastructure for energy efficiency and sustainability. They are proposing a 3.2-megawatt solar farm for their city of Bartlow, Florida, so they can also generate renewable energy. Madrid says, “We’ve done evaluations of existing buildings, both offices and residences, and made incredible strides in helping people to cut their energy costs.”

A third business opportunity presented itself, this time to build energy-efficient houses. He connected with a licensed contractor friend and decided to form Greenovative Homes LLC. They are in the process of building their first energy-efficient home. Based on a preliminary Home Energy Rating System (HERS), the home is nearly twice as efficient as the standard new construction in the United States. “This home is so energy efficient, the heating and cooling costs of this 2,000-square-foot home are estimated to be less than $25 a month,” Madrid says. As a featured green home in the community’s Parade of Homes, hundreds were able to get an up-close look at the sustainable technology at work.

He’s done his homework and explored different technologies. In the process, Greenovative Homes invented and patented an insulation product to create their own GreenStar Panels. Made out of extruded polystyrene (EPS), these panels are tremendous insulators. Other technologies are used to make sure heat doesn’t build up in the house, Madrid adds. “It is like a barrier around the house that makes it nearly impossible to heat up, even under the baking Florida sun.”

Madrid explains he’s also working on financial models to make his technology widely available by selling the GreenStar Panels to contractors and homeowners interested in retrofitting their home. These panels allow Greenovative Homes to stand apart from their competitors. “We are just starting in the market but we’ve done a lot of research and created the panels to differentiate ourselves,” he says.

Madrid suspects solar may soon compete with other forms of energy, but he believes that energy savings in buildings is a faster and more powerful solution to create wealth in the country. When asked about his future hopes for all three businesses, Madrid explains his immediate goals are to create jobs and reduce people’s energy bills. “I never considered myself a super entrepreneur but these opportunities were big enough I felt I just had to do something with them,” he says.

Tapping Into the Latino Market