“You have to make decisions on the basis of values and principles. If you do that, you can operate in many industries.”

When Fernando Aguirre joined health-care giant Aetna’s board of directors in the fall of 2011, no one knew what was going to happen with the Affordable Care Act. “I knew that joining a health-care company board would be challenging, but I wanted to learn something new,” says Aguirre, who prior to that time had worked only in consumer goods.

For Aguirre, learning something new has been a way of life. Born and raised in Mexico, he scraped together enough money selling Datsuns to come to the United States and play baseball on a scholarship at Southern Illinois University at Edwardsville, learning English at the same time. After college, he went to work for Procter & Gamble, becoming one of the two highest-ranking executives in Latin America before leaving to become chairman and CEO of Chiquita in 2004. Throughout much of his career, however, Aguirre has had a second or even third job, serving on the boards of various companies. 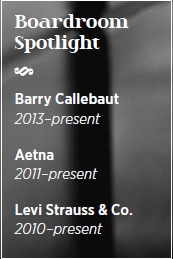 Aguirre’s first boardroom opportunity came near the end of his tenure at Procter & Gamble, when he was seeking broader experience in the business world. “Procter & Gamble was grooming me to be the head of its Latin American operations, but I didn’t want to move to the headquarters in Caracas, Venezuela,” Aguirre recalls. “Coincidentally, a Hispanic radio network asked me to join their board. As it turned out, that network was acquired by Univision, and I ended up with one of two board seats at Univision, where I served for two years.”

From that experience, Aguirre learned two things. First, while joining a board is a good way to gain broader experience, you have to ensure that your board goals are aligned with the goals of your current job and get buy-in from your company. Second, while industries are different, businesses are often similar. “One of the things they teach at Procter & Gamble is that you have to make decisions on the basis of values and principles, and if you do that, you can operate in many industries,” Aguirre says.

When Aguirre left Procter & Gamble for Chiquita, he felt overcommitted, so he stepped down from the Univision board. It wasn’t long, however, before he was asked to take a seat on another board, this time for Coca-Cola Enterprises. He couldn’t say no. “It was the largest bottler of Coke at the time, and it was a great brand,” he recalls of the opportunity.

During his tenure at Coca-Cola Enterprises, Aguirre learned about the responsibilities of a board member, the most important of which he says is making sure the company has the right management. “If you don’t have the right CEO, you should be looking for someone else,” he says. Aguirre also advocates making the right decisions for the business in the long term. “There are decisions that could benefit you personally, but you have to put the company first, and the only businesses that survive for many years do so because they’ve thought long term,” he says. Finally, Aguirre notes that it’s important to make all decisions according to the law of the land. “Make sure you’re telling your employees to respect the law, and if you have to do business in places where the law is not being respected, you shouldn’t be there, as a company or as a business person,” he says.

Aguirre served on the board of Coca-Cola Enterprises for five years, until the company sold its US operations to Coca-Cola in the United States, essentially becoming a European bottling company and requiring extensive travel to Europe. Aguirre, however, was hooked. “Serving on a board gives you the opportunity to both pass on your own knowledge and gain knowledge,” he says.

By that time, Aguirre was also an expert at getting a seat on the board, which he says takes three things. First, you have to gain experience. “Many young people walk out of an MBA program and expect to get the corner office and be the boss, but it doesn’t work that way,” Aguirre says. “You may have an MBA from Harvard or Wharton, which is terrific, but nothing replaces experience, and that comes with time.”

Second, you have to commit the time. “One of my first questions when called about a board is the calendar,” Aguirre says. “If I have a single conflict, I don’t even start talking about interviewing, because I’m only willing to join the board if I have the time to attend the meetings.”

Finally, you have to be a listener as well as an adviser. “You need to learn when it’s the right time to say what you know, and you need to know when to be a listener, because not everything you’ve done applies to every situation,” Aguirre says.

Aguirre’s next two board appointments  came fairly easily. In 2010, he joined the board of Levi Strauss & Company; less than a year later, he joined the board of Aetna. The two companies—an apparel manufacturer and a health-care insurer—couldn’t be more different. They were alike, however, in that they were both new to Aguirre. “I’m a marketing person by training, and I was thrilled that a brand as iconic as Levi’s, and an insurer as established as Aetna, would ask me to join their board, but I hadn’t worked in apparel or health care, and both provided me with a great opportunity to learn a new industry,” he says.

Aguirre had a good run at Chiquita, where he was the first Latino to appear on CBS’s Undercover Boss. He left, in 2012, because he was looking for something different. “I started investing in other businesses, spending time with family, and enjoying myself more, things I hadn’t done much of in my last 10 years of work,” says Aguirre, who is now a partial owner of the Cincinnati Reds and very involved in philanthropic work for the Juvenile Diabetes Research Foundation, an interest that stems from his son’s diagnosis with Type I diabetes 10 years ago.

One thing hasn’t changed: Aguirre’s commitment to board work. He still serves on the boards of Levi Strauss & Company and Aetna, and in April 2013, joined the board of Barry Callebaut, a Swiss company that is the largest chocolate manufacturer in the world. “It’s similar to bananas in that it involves sourcing from farms in the same areas, but involves a lot more processing, so it’s a great opportunity to both share my knowledge and learn something,” he says.

All three of Aguirre’s current board positions inspire him by virtue of the fact that the companies have proactive leadership by management. “I’m disappointed by people who waste their skills and abilities or who are in the wrong place,” he says. “Jack Welch used to say that if you have a person who’s not delivering, you’re doing a disservice to both the person and the company if you don’t tell that person he or she isn’t cutting it. And there are many people out there who think they are, but in reality they’re not. That’s not the case at Levi’s, Aetna, or Barry Callebaut. We have three great CEOs.