As CFO of the Americas region at Yves Saint Laurent, Eduardo Perez has helped bring the iconic brand to new heights 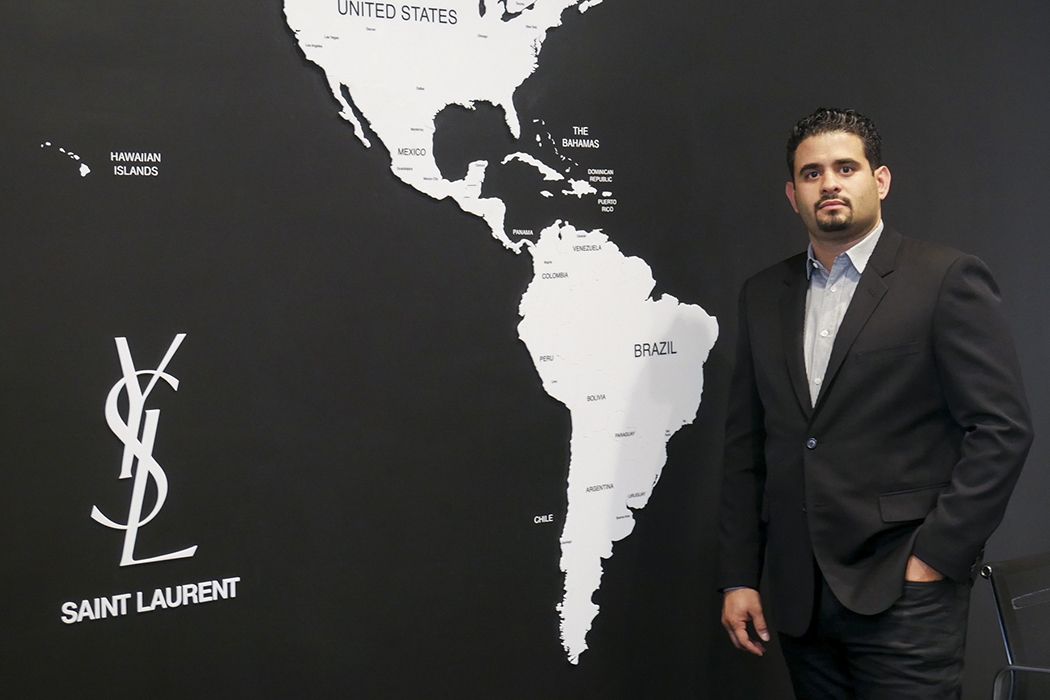 Eduardo Perez always knew he would go into business, but being part of the fashion industry wasn’t part of his childhood ambitions. Today, the CFO of the Americas region at Yves Saint Laurent has been in the industry for more than sixteen years, spending time at prominent brands under the Kering Group as well as at Lacoste.

Perez was born in Caguas, Puerto Rico, and when he was six years old, his family moved to Milwaukee, Wisconsin. After his father died, Perez was sent to live with his mother outside New York City. In his low-income neighborhood in Newark, New Jersey, getting robbed or jumped wasn’t unusual, and avoiding violence and drugs was crucial but difficult.

“Early on,” Perez recalls, “I realized that I needed to get out. I wanted to do better.”

One day, frustrated at not having the money to buy candy or a new pair of shoes, Perez walked into a bodega and asked for a job—any job.

He began by sweeping floors, and was eventually asked to stock shelves, make sandwiches, cashier, and fill out bank deposits. All of it planted the seeds for choosing his future career. “The job curated this desire to learn how to run a business, and I knew quickly that’s where I was headed,” he says.

Meanwhile, Perez was speeding through school, skipping second grade and finishing high school a year early. He earned an associate degree at seventeen, a bachelor’s in accounting from Rutgers University a few years later, and then an MBA in finance.

His career also unfolded quickly. “I had a lot of opportunities present themselves,” Perez says, “and a lot of good people—mentors—took me under their wings.”

He began his career in finance at a security firm, then became controller for a real estate group. Soon, Gucci Group (a previous structure under Kering) called, but the opportunity didn’t seem to make sense at first: it would mean a step back in title and responsibility. “All I kept hearing during the interview process was how evolving, ever-changing, and exciting the fashion industry was,” Perez remembers. “I realized where I was didn’t fit my personality, so I rolled the dice.” He took one step back so that he could eventually take two steps forward.

Those two steps happened quickly, then turned into a giant leap forward. Within six months at Gucci Group, he was promoted; after another six, he was promoted again. “Some of it was being in the right place at the right time; some of it was going in with sleeves rolled up,” he says. He worked on lines like Sergio Rossi, Balenciaga, Stella McCartney and Alexander McQueen—emerging brands at the time.

After a couple of years he took a position at Lacoste, where his view of the fashion industry expanded beyond finance as he stepped into operations and began supporting other departments such as merchandising and sales. During that time, he adapted to the European culture and refined his ability to communicate with his counterparts. “For the first time, I understood how fashion influences our lives—how you can really enjoy a brand, wear the product, and feel like it becomes part of your lifestyle,” he says. Four years after joining the company as controller, he was promoted to CFO.

“All I kept hearing during the interview process was how evolving, ever-changing, and exciting the fashion industry was. I realized where I was didn’t fit my personality, so I rolled the dice.”

The fashion industry had become a core part of Perez’s life. So, when Saint Laurent was searching for a nontraditional CFO—a business partner, someone to help grow the business—Eduardo Perez was their choice.

Throughout its history, Saint Laurent has broken cultural barriers and instituted new norms. “Mr. Yves Saint Laurent was a trailblazer,” Perez explains. “When you look at what’s happening with inclusivity in society today, Mr. Saint Laurent was doing that a long time ago.”

Perez accepted the role and was asked to open the market in Latin America. In his Latin America travels, he studied brand awareness and turned his household Spanish into the language of negotiation. He opened up México first, then Brazil, and later Panamá and the Bahamas. He chose partners, navigated the terms, and set up back-of-house functions in each country.

“[It’s] amazing—as a Hispanic, as a Latino—to be able to come in here and develop business in Latin America,” Perez says.

As trends change, fashion changes—and the financial side of the business must be able to keep up. At the intersection of fashion and finance, Perez says, “you have this collision between the creative and business minds that allow for a game-changing experience for a brand.” Whether it’s Marco Bizzari and Alessandro Michele, or Saint Laurent’s own Francesca Bellettini and Anthony Vaccarello, brand success is attributed to powerful partnerships across the creative and business sides.

As executive board member to the Center of Business of Fashion at Rutgers University, Perez helps the next generation understand how fashion and finance come together in this way. “At this point in my career, [it’s about] continuing to motivate and inspire, especially the Hispanic community,” he says.

Reflecting back on his own journey, he adds: “Anything you put your heart to you can achieve. It may not be easy, but it’s possible.”

Camila Fernandes Has a Plan

Julie Melendez-Reicis Is Fit to Lead