It is not unusual for tourists visiting New York City to go home with soreness from a few days spent craning necks skyward. After all, everything in New York is tall, from the downtown towers to the bridges over the East River to the video screens in Times Square and even the trees in Central Park.

Also notably taller in New York are the prices—especially those in residential real estate, which are the highest in the nation, according to a May 2014 analysis by real estate website Trulia. It calculated the affordability of for-sale homes in the 100 largest US metro areas and found that just two percent of homes in Manhattan are accessible to middle-class families—fewer than any other market in the country. In fact, the median sales price for a condo in Manhattan was $910,000 in the second quarter of 2014, according to New York real estate brokerage Douglas Elliman Real Estate. (By contrast, in Akron, Ohio, the median was $119,500, according to the National Association of Realtors.)

“Everything I made I spent on advertising, which ended up putting my competition out of business.”

Prices are even steeper in Manhattan’s thriving luxury market. Representing the top 10 percent of sales, it boasted a median sales price of five million dollars and an average price per square foot of $2,617 in the third quarter of 2014. Although prices like that would likely give Akron buyers nosebleeds, they won’t last forever, suggests New York City real estate broker Luis D. Ortiz.

Faced with a glut of inventory (forty-four new residential developments launched in New York City in 2014 alone) and a growing cadre of cautious buyers, New York will witness a more stable market in 2015 and beyond, he predicts. “Right now we’re in a very strong seller’s market,” says Ortiz, one of three New York brokers starring in Bravo’s hit reality TV series Million Dollar Listing New York. “Everyone wants to buy in New York, but inventory is very low. As a result, people are paying over [asking price] left and right. Records are being broken every day. That entices developers to build new inventory to satisfy demand, which in the future, will cause prices to stabilize.”

The suggestion of “stabilizing” prices might send some luxury brokers into a tailspin, but not Ortiz. “I’m able to adapt,” he says. “When the market is a seller’s market, I sell. When it’s not, I buy. Life is full of opportunities.” 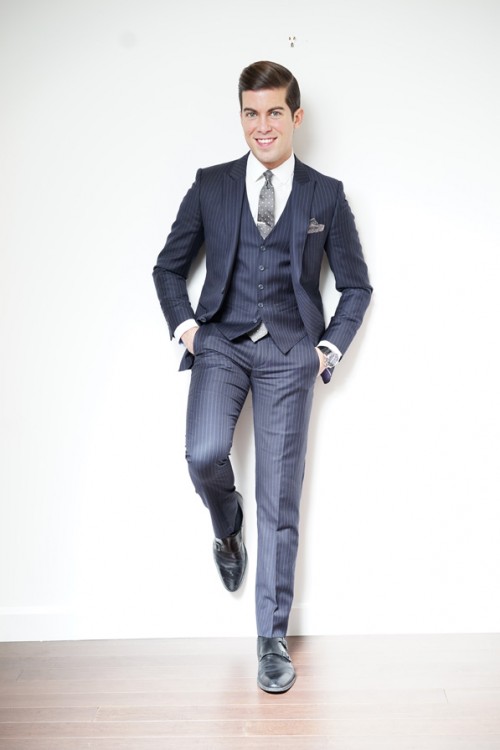 It’s not surprising that Ortiz embraces changes in the market. He has embraced them throughout his life. Originally from Puerto Rico, he left home at age sixteen. “One of the most exciting feelings, to me, is nervousness—like I would experience while giving a presentation in front of the class, or finally dating a girl I liked after eight months of trying,” he says. “I wasn’t feeling that way in Puerto Rico anymore. I wanted to feel something new again.” So one day, he told his parents he was going to the beach but had actually left a note in his dining room saying he was leaving Puerto Rico.

He landed in Fort Lauderdale, Florida, where he worked days as a stockroom clerk and nights as a janitor. After two years in South Florida, however, he felt the same flat feeling that had weighed him down in Puerto Rico. So, he once again pressed the reset button on his life, this time setting off to study film direction in New York. He graduated from the New York Film Academy in 2007 and subsequently directed two films, the last of which he considered a disaster. That’s when he discovered real estate.

“When I decided I didn’t want to do film directing anymore, I was living on a friend’s couch on the Upper West Side,” he recalls. He found an apartment advertised as a “brand new” two bedroom, two bathroom in the heart of the financial district for $2,400 a month on Craigslist. In truth, it was a studio apartment with a temporary wall made of plasterboard down the middle of it, renting for $2,800 a month.

“It was a scam, but for some reason that apartment made me feel so good,” recalls Ortiz, who decided to rent the apartment with his twin brother, Daniel. Unfortunately, neither was qualified to sign the lease. Undeterred, the brothers co-opted their father’s name—also Daniel—to secure a bank loan with which they could prepay six months’ rent. The broker of the apartment said, “You just brokered an impossible deal because you’re clearly not qualified. You should try real estate.” Three weeks later, Ortiz obtained his real estate license. Three days after that, he made his first deal, the commission on which was $3,000.

“Everything I made I spent on advertising, which ended up putting my competition out of business because every time someone clicked a link on Craigslist, the ad was mine,” says Ortiz. “Most people do real estate for money. I never aim for that,” he says.

His optimism and work ethic are why market changes don’t scare him. Not even the most controversial ones, like a tax recently proposed on pied-à-terres in the city. The tax aims to counteract absentee homeowners who negatively impact the local economy by claiming its residential space, leaving it vacant, and spending their disposable income elsewhere. Although he’s “not too happy” about the proposal, Ortiz admits, it’s not likely to scare away the foreign investors who constitute much of his client base.

“New York City has become the new Swiss bank; there’s international money coming in from all over the world,” he explains. “There’s a perception that New York is the greatest city in the world, so people with money in unstable countries put it here, knowing that even if the market goes down in the short term, it will continue to go up in the long term.”

Tax or no tax, seller’s market or buyer’s, Manhattan’s status promises perpetual job security for opportunistic brokers. “Buyers are trending towards being a little more careful—when they’re not being as aggressive, inventory sits on the market a little longer—but there will always be iconic buildings that attract a constant stream of buyers,” like 15 Central Park West, the Woolworth Building, and the Four Seasons, Ortiz says. “I’m successful because I understand that; I know where there’s value, and that knowledge makes me an asset to my clients, regardless of the market.”