When Claudia Pardo came to the United States in 1999, she had every intention of returning to her native Peru. While pursuing her master’s degree, however, she met the man who would eventually become her husband and the rest, as they say, is history. Pardo now serves as The Nielsen Company’s senior vice president, strategic account manager, and though she currently has a firm grasp of the American market, picking up on the nuances of communication proved to be one of the most challenging aspects of moving to the states. “Growing up in Peru, I learned English, but the real challenge was understanding conversational English,” Pardo explains. “When you move to a new country, you may know the language, but there are cultural nuances that have to be understood. There are formal and informal ways of communicating that are vital to effective communication.”

Pardo’s role at Nielsen, a leading global provider of insights and analytics into what consumers watch and buy, has her working closely with Univision, the leading media company serving Hispanic America. Her goal is to help the network increase its business by better understanding its audience, how it’s growing, and how habits concerning the consumption of media are evolving. The Hispanic population accounted for more than half of the nation’s growth over the past decade, seeing an increase of 43 percent in 2010. Latinos now constitute 16 percent of the nation’s total population and as Pardo points out, no matter what your industry, where you’re located, or how you conduct business, you can’t discuss growth without factoring in the Hispanic community. “If you’re focused on growth—expanding your business or increasing your visibility and reach—you cannot even talk about it without knowing how Hispanics contribute to growth. You have to have the information and you have to know what it means, how it translates. Information doesn’t help unless you know how to read it,” Pardo says. 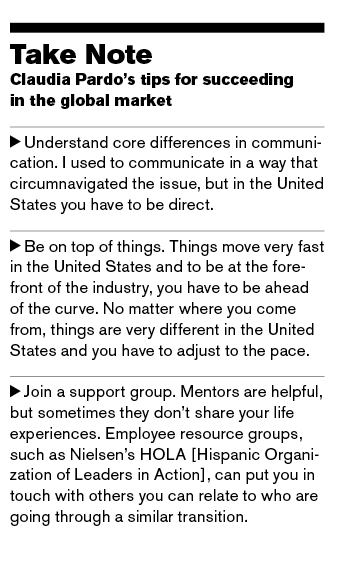 In 2010, as a way of recognizing the contributions and culture of Hispanics in the United States, Nielsen created a snapshot of Hispanic media usage in the United States, finding that the community is much less homogeneous than many assumed. It was actually discovered that as a group, Hispanics are more diverse than any other ethnic group in the country because of factors such as citizenship, country of origin, socioeconomic status, and education. It is because of these factors and the innate diversity in the community that Pardo believes those of Hispanic descent are well suited for business. The energy, personality, warmth, and openness the Pardo believes to be inherent in the community are also key in forming lasting business relationships.

“I believe Hispanics have a lot to contribute to the business world,” Pardo says. “I can only speak for myself, but when I recall the limitations I had to overcome while living in Peru, it forced me to be more creative. I believe many have a similar experience and we end up being very innovative; we think outside of the box and this diversity of thought is very beneficial to companies,” she explains. “There’s also a social aspect in the Hispanic community. We have large families, we have many close friends, from an early age we learn to navigate extended networks of relationships and by the time we’re in the professional world, this comes very naturally to us. Not only is it useful when developing business relationships with clients, but it’s also useful when working in teams.”

As a result, Pardo believes the media industry is the perfect place for young Hispanics—as long as they are committed to giving it their all. “Passion is crucial, but it has to go beyond passion. You have to be on top of what’s going on, know what’s relevant, and bring energy to whatever you do. Don’t just do your job, volunteer for projects, go above and beyond to help the organization. If you do these things, you will succeed.”