At the opening-night screener for Cinco de Mayo: La Batalla at the 29th annual Chicago Latino Film Festival (CLFF), there was no red carpet, no grandstand of screaming fans, and no high-profile emcee herding the audience through the evening’s proceedings with costume changes or canned jokes. At the entrance, people in states of dress ranging from camera-ready glitz to cocktail casual simply waited for their tickets with low-level conversation. It was, in short, exactly the sort of laid-back, nicely attired cultural affair you’d expect in a Midwestern metropolis.

This might have surprised some since, according to the event’s hosts from the International Latino Cultural Center (ILCC), the CLFF is now the largest and oldest Latino film festival in the US. However, if you were simply there to take in the atmosphere and have a good time, as I was for Hispanic Executive, the evening was a fine celebration of film, heritage, and community—with food and drinks to boot. 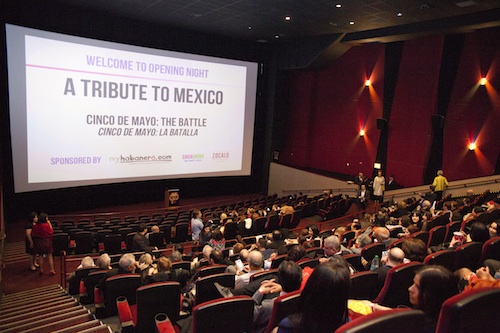 Upstairs, a long line stood in front of the largest theater in the AMC River East 21 multiplex, where the event was held, until the doors opened a little after 6 p.m. I and my fellow attendees, managing editor Chris Sheppard and staff photographer and photo editor Sheila Barabad, managed to grab some of the best seats in the house, right up front, where the evening’s theme, “A Tribute to Mexico,” stood looming in tall letters on the screen. Apart from the gathering crowd, some of the only evidence that we weren’t attending your average Thursday night screening stood in the corner of the theater: there, the film’s director, Rafa Lara, and two of its stars, Kuno Becker and Jose Carlos Montes, posed arm over shouldered arm as members of the press popped flashbulbs in front of them.

Lara’s latest film is a reenactment of the Mexican army’s victory over seemingly superior French forces at the Battle of Puebla, which took place on May 5, 1862, during the Franco-Mexican War. At the screening, ever the showman, Lara was wearing the actual 19th-century-style military jacket of the Mexican general from the film, a formal dark-blue button-up coat with gold fringe around the collar and cuffs, and minutes after his arrival he took to a front podium to command and lead his audience with a speech of thanks before the lights went down.

And how was the film itself? “Ambitious” is the first descriptor that comes to mind. Details surrounding the Battle of Puebla are incomplete, and Lara and his team spent a good deal of time researching the event before embarking on their multimillion-dollar adaptation. As someone largely unfamiliar with Mexican political history, I found myself fascinated and interested in learning more about how the country’s war with France came about and how it affected other geopolitical matters of the time period, including the United States’ own civil war. 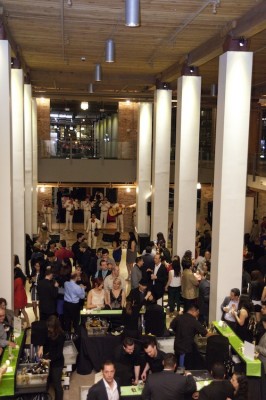 The movie follows a great number of intentionally over-the-top characters through the conflict and the events that lead up to the clash at Puebla, and it was refreshing to see battle scenes filmed with hundreds of extras and hand-held cameras rather than the smooth, overly painterly CGI animation so many directors lazily deploy for almost every large-scale set piece these days. There were times, though, when the action got so confusing that I didn’t have an adequate sense of the field of combat and couldn’t tell where soldiers were coming from or going to, and the runtime of the film probably could’ve been cut down with some editing of the longer skirmish scenes. However, if you have a taste for historical melodrama, it’s likely such issues won’t hamper your enjoyment.

The evening closed with an after party at the nearby River East Arts Center, where the “Tribute to Mexico” theme became more explicit as servers passed out tequila, margaritas, and Zocalo tacos while a live mariachi band filled the room with music. The food was spicy and the drinks strong, Lara and Co. posed with fans, and as the ceremony drew to a close,

patrons exited happily into the crisp night air. The ILCC’s three decades of experience hosting the festival was on hiccup-free display, and it seemed more than prepared for the screening of nearly 120 additional films over at the AMC Loews 600 over the course of the next two weeks. Hispanic Executive is one of the sponsors of this year’s CLFF, so maybe we’ll see you there.