Carmen Heredia-Lopez, director of investments for the Chicago Teachers’ Pension Fund, shares her insights with HE on the troubling numbers the fund is facing this year, and how women—particularly Latinas—can thrive in traditionally male-dominated industries

“We’re not managing play money,” says Carmen Heredia-Lopez, director of investments for the $10 billion Chicago Teachers’ Pension Fund (CTPF). “The recommendations we make to our board of trustees directly affect the livelihoods of thousands of teachers.”

In moderate economic times, such as the period from 1988 to 2009 when the state of Illinois contributed $65 million annually to the CTPF, managing teachers’ pensions would be stressful. But today, when the state’s contribution has dropped to $10 million a year (according to an April 2012 testimony by Kevin Huber, director of the CTPF), at-risk pensions keep Heredia-Lopez awake at night.

Getting to know Carmen Heredia-Lopez

What are your hobbies?
I’m a triathlete, so I enjoy swimming, biking, and running. I also enjoy yoga and travel.

How did you get into
triathlons?
My husband got me into it. I’d cheer him on when he raced, and after a while, I asked myself, “Why am I on the sidelines?” I started doing walks while he was doing runs and worked my way up from there. I did my first 5K in 2001 and my first triathlon in 2004, and from there kept aspiring to longer distances. In 2009 I completed the Madison, Wisconsin, Ironman triathlon.

How hard was it?
The physical part is difficult
but as long as you train properly, you’re ready. The day of the triathlon, the challenge is mostly mental. You have a lot of time for self-talk, which can make or break you. The reason you are out there doing the triathlon becomes very important. My quote during my Ironman training: “For every-one who thought I couldn’t do it, for everyone who thought I shouldn’t do it, for everyone who said it’s impossible: see you at the finish line.”

Other than exercise, how do you unwind?
I like getting massages and I enjoy being outdoors with my husband and my six-year-old daughter. I also like to travel to new places—there is so much to see and learn.

What are some of your
favorite travel destinations?
I like the beach. I went to Jamaica for the first time this past spring, and I still have family in Bolivia, so I try to visit regularly.

What’s your most notable travel experience?
I was in Egypt on September 11, 2001. I did not know which country was safer.

How do you balance work and personal life?
Lots of planning and sharing calendars. Doing the Ironman triathlon with a young child was hard. Since my husband and I were training for it, we trained in shifts, and our mothers helped out a lot.

What’s your favorite book?
A few years ago, a coworker led me to the The Four Agreements (Los Cuatro Acuerdos). I read the book and have the agreements written out on a piece of paper next to my desk.

What values did your parents pass on to you?
Authenticity (with myself and others), devotion to family, and humility.

What values would you like to pass on to your daughter?
The same ones my parents passed on to me, plus integrity, transparency, and respect for others. I’m very tolerant of other cultures and people. Even though I might have different views, I think it’s important to respect the views of others.

What attracts you to your
current industry?
I love to learn, and I never feel like I know everything in this rapidly changing industry. When you think you know everything, the stock market has a way of making you humble.

If you had to choose another career, what would it be?
I liked archeology as a child, and before starting a family, I took Egyptology and archeology classes. I think one can find answers to current problems in history.

“It’s a real problem,” Heredia-Lopez says, and she should know: although most public employees served by the CTPF are teachers working in the Chicago Public School District, employees of the plan are also members. “Our retirement is at risk, too,” she says. Unlike private-sector employees, public-sector employees don’t contribute to social security, so the CTFP is their only retirement plan—and they have little control over its size and growth. Contributions come from both employees and the state, and Heredia-Lopez and her team manage the CTFP’s investments.

Because assets held in defined-benefit plans must grow enough to provide the necessary payout, it’s the responsibility of an investment team—in the case of the CTPF, Heredia-Lopez and her five employees—to ensure that they do. “Every year we have to look at how we’re positioning our portfolio so we’re able to meet our liabilities 15 or 20 years in the future,” she explains. “Currently, because we’re not getting enough money from the employer side, we have much more to make up in returns. Do we want to put 50 percent of our portfolio in private equity, which is supposed to generate high returns? Or do we want to be conservative and put 80 percent in fixed-income securities?”

Ultimately, the CTFP’s 12-member board of trustees has to decide how much risk they are willing to take. Currently, the CTPF is targeting high returns. It has just 20 percent of its portfolio invested in fixed-income securities. The remainder of the portfolio is invested in domestic equities (31 percent), international equities (31 percent), public and private real estate (9 percent), private equity (3 percent), infrastructure securities (2 percent), and hedge funds (2 percent). “We’re hoping the heavy investment in equities will generate the growth we need,” Heredia-Lopez says.

A breakthrough career
“Along with my job title comes a lot of responsibility, and I try to keep that in the front of my mind on a daily basis,” Heredia-Lopez says. She’s clearly cut out for the job, enjoying the impact it allows her to make not just on the Chicago teachers’ community, but on others seeking to follow in her footsteps. “A lot of minorities don’t know this industry exists, and one of my goals is to make more people aware of the opportunities it offers in terms of jobs and impact on our community,” she says.

Although mentoring was foreign to Heredia-Lopez when she began her career, she was encouraged to find a mentor by the Robert Toigo Foundation, which awarded her a scholarship for her MBA. Then, as she ascended the ranks of the investment world, she felt that she needed to do the same for others. Today, Heredia-Lopez speaks regularly at conferences, mentors people, and takes the time to speak or meet with people who reach out to her for advice. The organizations she volunteers with include the Robert Toigo Foundation, National Society of Hispanic MBAs, CFA Institute, New America Alliance, National Association of Securities Professionals, and the Rising Farmworkers Dream Fund.

In particular, Heredia-Lopez wants to stress that women—specifically Latinas—can succeed in a traditionally male-dominated profession. “When I was starting out in my career, people always wanted to put me in a marketing/client-servicing role, because it’s more socially acceptable for a woman to be in a care-giving-type job, and there’s a perception that women aren’t analytical,” she says. “But, I see that as a self-imposed limitation. I have a brain. I like math, and I can do it. Women and Latinas do have a place in the investment world. As Ghandi said, ‘Be the change you want to see in this world.’”

Interesting fact: Heredia-Lopez didn’t plan to enter finance at all. Her father’s influence led her to business, but she was still undecided on a narrower focus when she entered college, so she spent her first two years as an undergraduate at the College of DuPage, a two-year community college in Glen Ellyn, Illinois.

While studying, she worked part-time at a bank that would later become Chase, and it was there that she met a mentor. “One of my clients, a Puerto Rican woman named Margarita Perez, was opening an asset-management firm, and she asked me to work for her part-time,” Heredia-Lopez says. “It opened a world to me. I couldn’t believe there were billions of dollars of transactions going on every day.”

Thereafter, Heredia-Lopez became the poster child for educational achievement, with a pedigree that includes graduating magna cum laude with a bachelor’s degree in international business from Georgetown University and a master’s in business administration (MBA) from the University of Chicago, which is regularly rated one of the top five business schools nationwide. She also holds the Chartered Financial Analyst (CFA) designation, a professional credential offered by the CFA Institute to financial professionals who satisfy certain educational and experience requirements and successfully complete a rigorous series of three exams. “Margarita’s advice to me was that if I wanted to stay in this industry, I should get as many letters after my name as I could,” Heredia-Lopez says. “I took that advice to heart.”

Heredia-Lopez also stayed in finance, beginning her career in the private sector and working in investment research and portfolio management at various asset-management firms, including JPMorgan Investment Management (now JPMorgan Chase). Then, in 2006, she moved to the public sector, as the investment analyst overseeing the emerging manager and minority manager/broker programs at the $25 billion Illinois Municipal Retirement Fund.

Moving to the public sector
Heredia-Lopez’s decision to move to the public sector was partly personal: she was ready to start a family, and the long hours required by a private-sector job didn’t mesh with that goal. After moving to the public sector, however, Heredia-Lopez realized it was a good fit professionally as well as personally. “I think a lot of pension funds stick with what’s worked over past 20 years, and that’s not always what will work over the next 20 years,” she says. “I like bringing innovative ideas to pension funds, and therefore have the opportunity to effect change.”

Many ideas Heredia-Lopez brings to the table are connected to her cultural heritage. She was born in Bolivia and lived in Spain for several years before moving to the United States at age 10; she also lived in London for several years after graduate school. “My early years abroad were pivotal,” she says. “We lived in Barcelona, and while we were there, we traveled all over Europe. That opened my eyes to different ways of living. I think that’s what makes me so open-minded and accepting of different viewpoints.”

That cultural awareness and open-mindedness made it easy for Heredia-Lopez to look at CTPF’s portfolio in a global context and suggest increasing the fund’s exposure to international equities, which could help make up any shortcomings resulting from lower contributions. It also leads her to recommend smaller money managers for the portfolio’s investments when appropriate.

“My background also affects my work by bringing diversity to investment decisions,” Heredia-Lopez says. “Dr. Scott Page of the University of Michigan has written extensively on why teams of people find better solutions than brilliant individuals working alone and why the best group decisions and predictions are those that draw upon the qualities that make each of us unique. His research led him to the answer: diversity. Diversity in our upbringing, education, background, skills, experience.

“I can see the benefit of using a large money manager, but I also like being a catalyst to open doors for a lot of emerging money managers and brokers, many of which are minority-owned,” she continues. “It’s still not the norm in this industry.”

If Heredia-Lopez’s determination is any indication, she’ll certainly meet all of her goals. Having overcome an inability to swim and a deathly fear of water to compete in her first triathlon in 2004, she continued on to complete an Ironman triathlon in 2009, which involves a 2.4-mile swim, a 112-mile bicycle ride, and a 26.2-mile run. “Completing a triathlon really demonstrated to me that I could do things I didn’t even dream I could do,” she says. “Don’t let others define who you are.” 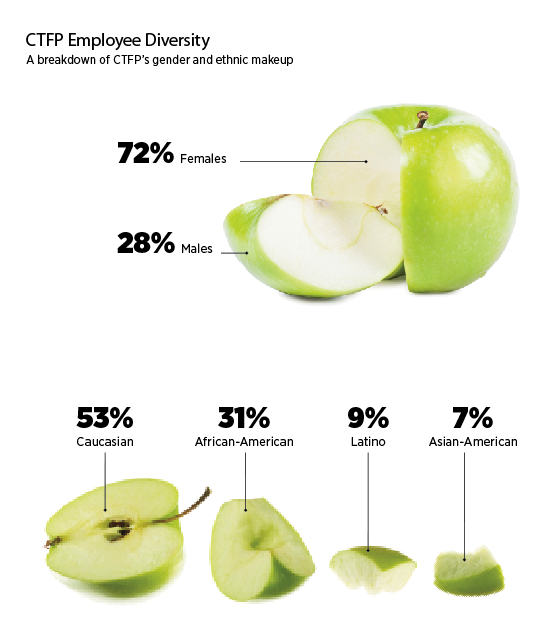 After press time, Carmen Heredia-Lopez stepped into the role of chief investment officer.