While raising two small children and training for the Boston Marathon, Yvonne Garcia works to make the business world a better place for Latino professionals through her role as national vice president of ALPFA

When describing Yvonne Garcia, the words “tireless” and “dedicated” come to mind. Garcia, director of segment marketing for Liberty Mutual in Boston, is also national vice president for ALPFA [Association of Latino Professionals in Finance and Accounting], the largest national association of Latino professionals in the United States. The organization, which boasts more than 17,000 members, shortened its name last year from the Association of Latino Professionals in Finance and Accounting to the acronym. They also added the tagline “Building Latino Business Leaders” to accommodate its growth in new fields, including law, insurance, manufacturing, and information technology.

Garcia also sits on the organization’s National Corporate Advisory Board for Women of ALPFA and chairs both its marketing committee and ALPFA Cares committee, the latter being the organization’s philanthropic arm. Garcia has a long history of serving on boards, such as La Alianza Hispana, the Jose Mateo Ballet Theatre, Governor Patrick’s Latino American Advisory Committee, and Milagros Para Niños (Children’s Hospital) in Boston, to name a few. While raising two small children, Garcia has also found the time to train and participate in the Boston Marathon for the last two years. 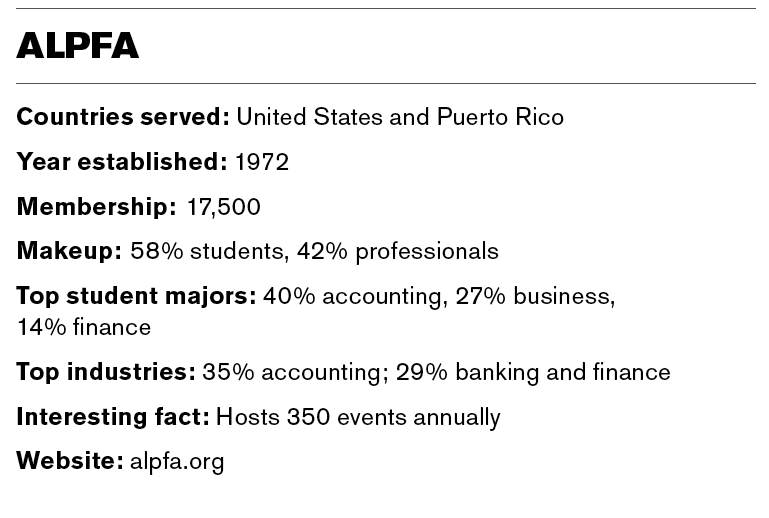 She holds an MBA from Boston University in finance and marketing, a bachelor’s from La Sorbonne in Paris where she studied economics and culture and has a Six Sigma Black Belt—which she attained while opening up more than 80 wealth centers throughout China. She is the recipient of numerous awards and has been selected as one of the “Most Influential Latina Leaders” in Massachusetts five years in a row.

It’s this drive and determination that sets her apart and gives her the platform to lead by example. For ALPFA, Garcia works tirelessly to reach as many Latinos as possible and give them the professional support they need to realize their career goals. ALPFA provides young professionals with mentorship, hands-on experience, scholarships, and exposure to potential employers.

Continuously learning and, in turn, inspiring others, is “who I’ve been for the last 20 years,” she says, noting that most of what she does in the community is to advance education. “Latino youth is a segment that lags behind in terms of high-school graduation rates, so I’m always striving to be there for them, as a mentor, a role model, or even just a friend. I try to inspire them and show them the benefits of receiving an education and how it can translate into a powerful tool for their future endeavors. I constantly encourage them to keep moving forward beyond college and in their careers and to continue to add tools to their résumé, as it will only make them that much more competitive.”

With ALPFA Cares, she and other leaders are working to find a national partner with robust programming that can help with mentoring and role modeling for high- school students. Through this program, “We hope to inspire leadership in young adults and positively influence not only their career, but also their life choices, such as financial literacy and health and wellness,” Garcia says.

In 2011, Garcia focused much of her attention on expanding ALPFA. Along with national president Hector Perez and CEO Manny Espinoza, ALPFA is opening several chapters in 2012 in areas where the Hispanic community was showing significant growth and places where industries were seeking a diverse workforce, such as Kansas City, Omaha, and Cincinnati. Last summer, ALPFA launched the ALPFA Institute at the Sam M. Walton College of Business, which provides programs emphasizing diversity and inclusion, talent and thought-leadership development, and Hispanic outreach and engagement.

ALPFA also partners with the Hispanic Scholarship Fund, which is supported by several corporations, and awards more than $130,000 in scholarships annually. In addition, the top 50 students are brought to ALPFA’s annual convention and given access to leadership training, a strong network, and a career fair with more than 100 national corporate partners.

August 11-16, ALPFA will celebrate its 40th anniversary at the 2012 Annual Convention in Las Vegas, where Garcia will be up for election as national president of ALPFA. The slogan, “Shining the Light on 40 Years of Latino Leadership,” is aptly named not only for the success of the past, but as a nod toward the future as well, thanks to strong role models like Yvonne Garcia leading the way.