Photo by Valerii Evlakhov on adobe stock
By Raquel Tamez

Mission. Vision. Values. Click through nearly any organization’s website, you’re almost certain to find them spelled out somewhere. Articulating these ideas has become a must, a way for customers, stakeholders, and prospective employees alike to learn more about an organization.

But while your mission and vision are bound to be forward-facing—focused on long-term goals and ambitions—the values piece is where things get a bit trickier. In theory, they’re supposed to represent who you are right now. The building blocks of your cultural DNA. But for far too many organizations, these values have become a kind of PR spin machine—a way to use a bunch of trendy business jargon to show themselves in the most flattering possible light. Like taking a selfie and using every filter you can to make yourself look flawless.

A fast-food company that claims to be “health conscious.” A construction firm that trumpets “safety first” when it violates OSHA standards year after year. From a certain perspective, I understand why organizations would want to shoot for the moon with their values verbiage. By setting your aim as high as high as possible, the thinking goes, you’ll galvanize the workforce, inspire the stakeholders, and appease the shareholders.

In fact, research has shown that creating overly ambitious values can backfire—not just with customers, but employees as well. According to a Gallup survey cited in a 2017 Harvard Business Review article, only 27 percent of workers “believe in” their organization’s stated values. That’s a staggering number and speaks to the broader disconnect between intention on the one hand, and reality on the other.

The truth is, you can’t simply speak your values into existence. You must live them. Reflect them. Embody them. In other words, it’s important to be genuine—to be who you say you are, rather than trying to be something you’re not (or even aspire to be).

That kind of honesty isn’t just good for employee morale; it’s also good for business. In another study cited in that same HBR article, researchers found a strong correlation between financial performance and “the extent to which employees believed their company’s espoused values.” Clearly, workers pay attention to how their organizations perceive and represent themselves. As they should!

This was something I was very cognizant of when I changed jobs last year. One of the first things I did when I joined my new firm was help the human capital team circulate an updated version of our annual employee experience survey. Team members were given lots of space to write comments, and the anonymous format meant they could be as honest as they wanted. While the resulting “word cloud” was a bit too broad for us to rely on exclusively, it did provide some useful context—as well as a few words that did end up being included in our updated values.

In the months ahead, as I learned the business of the firm and got to know my colleagues and the culture, I tried to zero in on what defined us. The words that captured who we really were, not some bold Platonic ideal we aspired to and might never reach.

In the end, the four words we came up with were integrity, collaboration, resourcefulness, and accountability—or iCRA. The “i” in front has a double meaning: integrity is at the heart of everything our firm does (and therefore should come first), but we also expect each individual team member (“I”) to embody that commitment.

Of the next three words, two of them (collaboration and accountability) were very prominent in our word cloud. And while resourcefulness wasn’t one of the words that came up repeatedly, we felt confident in making it one of our values. Since the beginning, our firm has had to be nimble. Scrappy. Able to perform at a high level—often under tremendous pressure. It’s a point of pride for our firm.

These values may not be the most exciting buzzword concepts in the world, but they are true to who we are as a firm. And that fosters trust—with team members and stakeholders alike.

Why is trust so important? For one, it leads to greater productivity and lower attrition. A different HBR article from 2017 found that employees in “high-trust” organizations were 50 percent more productive than those in “low-trust” organizations. While the research didn’t draw a direct connection between organizational values and that sense of trust, it’s safe to assume there’s some correlation.

But there’s another reason why it’s important to have a set of values that your employees believe in (and buy into). If you really want to create a culture where diversity, equity, and inclusion are truly embraced, you need strong, sustained buy-in from your employees—and that requires trust. If you’re a Black or Hispanic employee working for an organization that has “inclusive” as one of its stated values, and yet you routinely feel neglected at work, that “value” rings hollow.

Are there organizations that can claim, in good faith, that “inclusive” is one of their core values? Without a doubt. But unless your workforce and corporate culture truly embody the meaning of that word, adopting such aspirational language is bound to sow doubt—even distrust. That doesn’t mean you shouldn’t strive to cultivate a more diverse, equitable, and inclusive culture. You absolutely should. But until you’ve reached a point where employee input and feedback reflect the fact that you’ve made actual, sustainable progress on these fronts, these concepts aren’t who you are. At least, not yet.

In the end, it’s all about understanding where your organization is right now—and owning it. Your values can, and should, evolve over time. But defining those concepts requires an honest, sober assessment of what you are.

In other words, a clear picture—without all the fancy filters.

Raquel Tamez currently serves as the chief inclusion and engagement officer (CIEO) at global consulting firm Charles River Associates (CRA). A leader in providing economic and financial expertise to major law and accounting firms, CRA also does consulting work for corporations and governments around the world. Tamez plays an integral role in the firm’s DEI efforts and initiatives—both in-house and globally—and is essential to empowering its workforce. Her ability to strengthen CRA’s culture allows the firm to better serve its clients and communities. 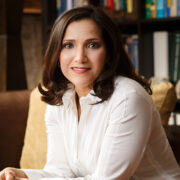