“In 1998, fueled by the Lord’s guidance, I began to rebuild what the fire had taken. Prior to the fire my sales were a few $100,000, but by the next year I was able to grow to more than $3 million in sales. As the years passed, I was able to increase sales exponentially; by year four I had surpassed $10 million. The growth was incredible—I knew that in order to keep up with demand, I would need to expand Harvey Pallets.

I spent only two years in Harvey, Illinois, before purchasing a 22,000-square-foot building in South Holland, Illinois. In 2005, continued growth forced me to move yet again, this time to Blue Island, Illinois, the current home of Harvey Pallets. I purchased a 250,000-square-foot building, where I thought I’d have more than enough space to manufacture, warehouse, and repair pallets. This assumption was short-lived, and as of three years ago, I had to add another 100,000-square-foot facility to keep up with demand.

Up until the year 2000, we had concentrated 100 percent on the recycled-pallet business. I had received numerous customers inquiries requesting new and/or combination pallets, but most of the time my response to their request was “no.” I soon realized by saying “no,” I was limiting my business. So, I began to purchase the raw materials needed to meet this new demand, but found that I was constantly on the search for lumber. The supply was very tight. Orders would be placed, requesting overnight delivery, but it would take one or two weeks for the new lumber to arrive at our factory.

During this frustrating time, I noticed a majority of our lumber was sourced out of Missouri, so I began to research the possibility of acquiring a sawmill in the heart of the state. In 2004, we opened the newly acquired sawmill, which has dramatically improved the quality and reliability of our supply. Today, we are currently producing 400,000–500,000 board feet of lumber each week and typically carry 500,000–1,000,000 board feet of lumber on hand at our Blue Island manufacturing facility.

Even though I’ve never had any formal business training, I have always been conservative when it comes to cash flow. I look at every detail, from the cost of nails and raw materials to fueling our trucks. In the pallet industry, like most industries, every penny matters and I am always looking for new innovative ways to reduce expenses without sacrificing quality.

In the beginning, we nailed each pallet by hand, working six days a week around the clock. I knew this type of system would limit the growth of Harvey Pallets, so I invested in our first automated nailing system, capable of manufacturing 1,200 pallets per shift. As of today, we have a total of four nailing systems that collectively can produce 1,200 pallets per hour to the predetermined specifications.

The Chicagoland pallet demand is among the highest in the country, which offers endless opportunities, and the values I’ve instilled from the very beginning [in the business] continue to push Harvey Pallets to new heights. We rely heavily on customer referrals, the website, and the branding that can be found on the side of one of our 240 trailers or on the shirts of our 100-plus employees. 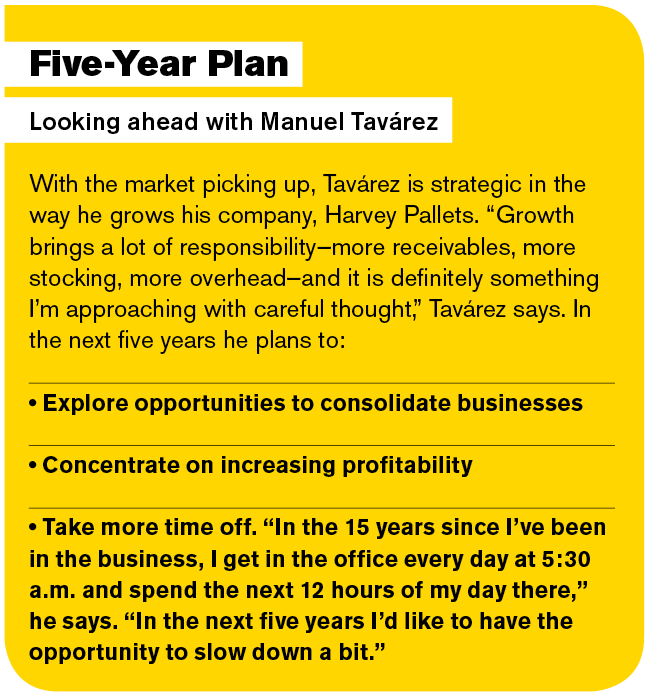 I would never have imagined that I would be the proud owner of a successful multimillion-dollar company—especially after the fire. I strongly believe you can do anything with hard work, a little patience, and a lot of passion. I feel how far you go in life depends on how far you are willing to push yourself. There have been many sacrifices along the way. I continually look to reinvest in the company. When the economy was in bad condition, I put every single penny back into Harvey Pallets.

I’ve always had big ideas on how to create a more successful business and how to make improvements within the industry. There are probably 280 pallet companies in Chicago, approximately 90 percent are owned by Hispanics. At Harvey Pallets, we strive to differentiate ourselves from other pallet companies, but we also understand the importance of creating partnerships with them.

As the variable costs associated with doing business increases, the creation of stronger partnerships will allow for greater flexibility in tackling those challenges. I have been approached with a few larger opportunities, but because of my conservative nature, I have had to pass on them because my new business philosophy hasn’t come to fruition. I’ll keep trying—I never give up. We’ve been very successful in the things we are doing [and] the way we are doing it, and I feel as a team we have a promising future.”