By Pedro A. Guerrero

Yes, you saw correctly—that is a presidential candidate on the cover of Hispanic Executive. In fact, it’s the first elected public official we’ve ever featured on the cover of this magazine. 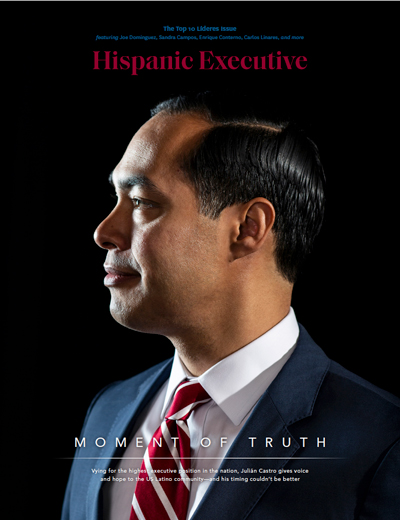 Why put a politician on the cover of a magazine that focuses on business executives? At least why now, when we have never featured one before and when, frankly, we have historically been apolitical?

We know that Julián Castro isn’t the first Latino to campaign for the US presidency. There were two Latinos who ran in 2016, and does anyone remember Bill Richardson in 2008 or even Ben Fernandez’s run in 1978? (I didn’t—but Google did.)

So why deviate from our practice now?

I’ve asked myself that question many times and the answer I keep coming back to is this: whether we like it or not, Latinos are at the center of the political world in America—and this is not just about immigration.

Although Hispanic Executive has stayed away from politics in the past, we have always provided a platform for the thoughts and opinions of our executives. In recent issues, those thoughts and opinions have more frequently included politics. Continuing an apolitical approach in this new societal environment would be ignorant to reality.

The opinions of our featured executives reflect what our community cares about—what our readers have increasingly told us they care about—and it’s time for our magazine to more intentionally make space for that discussion. Although we won’t endorse a political candidate or align ourselves with a political party, we will embrace the reality that our magazine can act as a vehicle for political conversations with the hope that we can engage in a dialogue that is rich and productive (at the risk of sounding naïve).

To signal our acknowledgement of the current societal environment and to showcase our platform for thought leadership in our community, we are fittingly putting an accomplished political leader on the cover of our Top 10 Líderes issue.

Engaging in the political conversation is not a decision I take lightly. As we all know firsthand, politics can be polarizing, and our community doesn’t need any more division than is already inherent in the kaleidoscope of identities that make up Latinoamérica.

But the level of attention focused on Latinos has reached a fever pitch. We are both the Bogeyman and the future of this country. We are the largest minority group that is also the most disrespected, and—I would argue—the most misunderstood.

The level of attention focused on Latinos has reached a fever pitch. We are both the Bogeyman and the future of this country. We are the largest minority group that is also the most disrespected, and—I would argue—the most misunderstood.

We find ourselves at the center of this political maelstrom, which has brought our community to a turning point. We can look at our position as one of weakness, where we are blamed for all that is wrong and claim society is against us. Or we can reframe our mind-set, own our narrative, and declare: we are the center of the political universe. All things gravitate toward us. That’s powerful.

To harness this time, own our narrative, and guide our growth, we need an exponential growth in our community’s leadership. Not only in corporate America, but politically as well. We can’t wait around for others to give us a shot. We need to take that shot for ourselves and for each other. It starts with owning and sharing our stories of leadership, both to inspire more leaders to step up (because, after all, “you can’t be who you can’t see”) and to be one another’s advocate when opportunities arise—in business, in government, and in society as a whole.

This is where Hispanic Executive plays a role. And some of this year’s best leadership profiles are featured in this issue—starting with the leader on our cover.

Letter from the Publisher: Make the Connections

Behind the Relaunch of Hispanic Executive Magazine

Conversations at the Top: Julián Castro