Raul Lomeli credits at least part of his good fortune in life to the month in which he was born: “I was born in August during the picking season in the United States,” he says. Lomeli’s parents were migrant workers who transitioned between the U.S. and Mexico to follow the growing season each year. Lomeli adds, “Being born here (in the U.S.) made all the difference for my younger brother and me because we were afforded all the opportunities that are provided to residents of this country.”

Those opportunities have materialized for Lomeli in the form of a successful business, SABEResPODER. The company is a multi-media platform that seeks to provide information to its 600,000 plus users, who are predominantly Hispanic immigrants. Lomeli explains, “The foundation of what we do is to help immigrants become better informed, confident and active consumers in U.S. society.”

For those who know Lomeli’s personal history, the name of his company, which translates to “knowledge is power,” is not a surprise. It’s an idea he says his parents have always instilled in him and his three brothers. “Even though my parents were migrant workers with only third- and fifth-grade educations, they told us that high school wasn’t going to be enough.” He says his parents wanted him to have the options that would come with a college degree. “Working the fields [which Lomeli did for years] was never degrading, but they wanted us to have options. They knew that with a college education, we could still go back to the fields later if we chose that, but my parents wanted us to have the ability to choose our paths. For me, that idea has been the greatest equalizer in life. I try to teach my children that same idea now.”

Lomeli went on to graduate from UCLA with a degree in political science and Latin American studies. He spent time working for the Mexican consulate in Los Angeles, but it didn’t take long for Lomeli to realize his true calling was to directly affect the ease and speed at which Hispanic immigrants integrated into U.S. society. 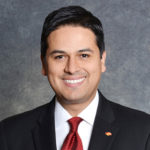 “I’ve always been good with money; but as I became a professional, I realized that it was key for me to find someone who could remove the worry my wife and I had about planning long term.”

SABEResPODER began as a company dedicated to helping immigrants learn how to open bank accounts in the U.S. It quickly expanded into a myriad of issues surrounding the idea of helping someone integrate into the consumer segment of the U.S. Lomeli’s goal is to ensure others have the information and options they need to make good decisions. He says his company does this through a digital Ellis Island of sorts.

“We interact with 600,000 plus users each month via SMS or text messaging. They can ask any question they want,” says Lomeli. Topics include things like paying taxes, insurance, medical care, financial planning, etc. The company also provides videos, closed-circuit TV stations and more to help immigrants plug into the U.S. culture, which, Lomeli argues, is more vital to integration than learning a language.

Taking His Own Advice

Lomeli’s business gives its users confidence. He specializes in building an education base within people so that they can reach new goals in life. At a certain point it hit him that he needed to take his own advice. “I’ve always been good with money; but as I became a professional, I realized that it was key for me to find someone who could remove the worry my wife and I had about planning long term.”

Lomeli found the confidence he was looking for when he sought the help of Northwestern Mutual Wealth Management Advisor Roberto Espinosa. He laughs, saying he expected to talk solely about a retirement plan, but that wasn’t the case. Espinosa provided several options for him and his wife. “We want an active retirement, and we have three kids we want to provide for. Working with an advisor allowed us to finally remove the worry we had about what to do to plan for our long-term financial future. It helped to have someone there who could make complex decisions seem simple. It gave us peace of mind.”

Understanding that sense of calm that comes over you when you feel well-informed has only fueled Lomeli’s drive to ensure that the people he serves get a chance to feel the same way. He says, “I want them to know there is a trusted source they can turn to, which is not political and is just an organization that is here to provide them with answers.”

As SABEResPODER continues to grow and become more and more sustainable, Lomeli says he sees it becoming an international force for helping immigrants around the globe integrate into their new countries. “If we can continue to leverage technology to help immigrants have the greatest number of opportunities possible, we will also help them be well-informed and succeed,” he says.

Cyberthreat Insurance and Why You Need It