Dare we say this book would be an eye-opening read for literally anyone? 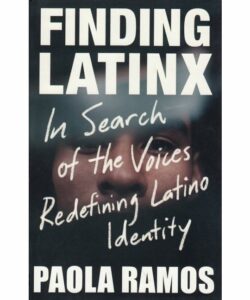 If there’s one major theme that resonates throughout Paola Ramos’s book Finding Latinx: In Search of the Voices Redefining Latino Identity, it’s love.

At first glance, this travelogue may not seem like the first thing you’d pick up if you were interested in reading a book about love. But that four-letter word and its variants are mentioned a surprising number of times throughout the text, and in a way that can only leave readers—especially Latinx readers—with a great sense of hope.

To write Finding Latinx, Ramos traveled around the US on a journey to learn more about the different types of people who fall under the umbrella term “Latinx.” She met even with those who do not necessarily embrace that term—which has only recently gained mainstream attention—and with a variety of other individuals along the way.

Now, make no mistake. Finding Latinx is not some definitive book about what it means to be Latinx, nor is it some cutesy travelogue. The book, for one, is relatively short, and the majority of the photos (some of them selfies) are decidedly un-fancy. That being said, Finding Latinx packs a punch. Many of Ramos’s subjects live under exceptionally difficult circumstances, while others have endured still worse conditions.

Take Karolina, a Mexican transgender woman who was placed in an all-male unit in Arizona’s Eloy Detention Center. Ramos writes, “Misgendered, bare naked, and humiliated: that was the beginning of a series of verbal, emotional, and physical abuses that would continue for more than three years of her life. Inside those halls—tucked away from scrutiny and any form of accountability—Karolina was allegedly repeatedly raped, assaulted, and mistreated. She spent months in solitary confinement, at times bathed with chains around her body, and slept every single night with the fear of not waking up the next day.”

Rather than lose hope, though, Karolina drew upon her inner strength, became an activist after her release, and went on to help others like her. Ramos writes, “I’ve seen Karolina walk into a detention center’s visiting room to greet transgender asylum seekers, and I’ve seen the way she turns their dismay into hope.”

Ramos is also quick to prompt readers to rethink any preconceptions they might have had. The Midwest, for example, feels like home to many Latinx, she writes, even though the supposed “heartland” is not in the center of the US but at its edges. She points out that “Along California’s Central Valley, the endless acres of land are responsible for growing more than half of the country’s nuts, fruits, and vegetables. This region of America is home to the voices that nourish our soul and fuel our wallets every single day.”

She also writes how this region, so beautiful on the surface, is prone to cyclical poverty and health issues that stem in part from poor air and water quality caused by pesticides. As the mayor of the city of Arvin tells Ramos, “Immigration is not the number one topic of my constituents . . . it’s whether the tap water will make you sick or not, whether my kids will have an asthma attack.”

The most beautiful chapter in Ramos’s book is titled “K’exel,” and in it she offers a glimpse of the Mayan populations in Canton, Georgia, and Greenville, South Carolina. This is part of Ramos’s overall tack of putting indigenous migrant populations center stage throughout Finding Latinx. It’s easy for some to overlook indigenous groups who have made a home in the US and to dismiss them as being far past hope of assimilation, but Ramos deftly shreds this misconception.

“My visits happen to coincide with 9/11, and it turns out that the Mayan community in Canton has an event planned to remember that terrible day in our history—though it isn’t necessarily the first activity or interaction one might imagine when walking into the Mayan community,” she writes. “I was expecting to see more Guatemalan flags than US flags or, truly, anything other than the stars and stripes. But I soon find out that’s exactly the point: Mayans here are redefining what American patriotism and loyalty look like.”

When Ramos interviews a woman in Texas named Mayra, who works to help educate Latinas in her area about reproductive rights, she says, “I enter Mayra’s small and attractive trailer home, one that is decorated with so much love that it makes me forget the outside world. The smell of warm tortillas, the soft cushions, the family portraits. Inside her house lies everything you need. Because if you look beyond this humble home, what else would you find? The answer is glaring at you: nothing.”

Then there’s Vidal, a formerly incarcerated activist working to end mass incarceration. Ramos writes, “Before I leave, I ask him: ‘If you could go back in time, what would you tell six-year-old Vidal?’ ‘To love yourself,’ he responds very clearly.”

Love comes up again in Chapter 11, titled “Invisible,” wherein Ramos travels to Poughkeepsie, New York, and marvels at how the Oaxacans who have moved to the area over the years have transformed the city. “That’s the thing about immigration—the shortest answer to the most complex questions about this debate is often love,” she points out. “No matter the borders, no matter the policies, big walls, or strategies, people will always continue to migrate out of love. That’s an unstoppable force. Poughkeepsie became home for many Oaxacans simply because that’s where their loved ones were.”

It’s tough to read a good book and refrain from saying, “This should be required reading,” because what’s the fun in that? That being said, Finding Latinx should, at the very least, be required reading for anyone who takes the Latinx community seriously in any way, or someone who just wants a starting point to learn more about this segment of the population. Because at the end of the day, Finding Latinx barely scratches the surface of what it means to be Latinx in America—and that’s entirely the point.

NextGen Collective is not affiliated with Paola Ramos. This review was not solicited by Ramos or her team.

Paola Ramos Asks That You Not Be Afraid of the X

Scott Cardenas Is in the People Business