Many know the honorable Nelson Diaz for his legendary career as the first Latino judge in Pennsylvania, staunch advocate for minority representation on corporate boards, and as Hispanic Executive’s cover star. Despite his success, though, Diaz does not shy away from sharing his humble beginnings growing up poor, flirting with crime in the streets of New York City. Continuing to pave the way for minority leaders, he returns to HE sharing his insights into the corporate world. 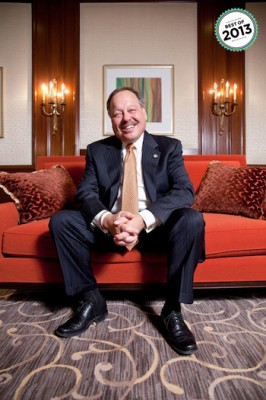 What made you get into this profession? That there were no Puerto Ricans in Pennsylvania who were admitted to the bar as lawyers and none on Fortune 500 boards of directors.

How do you establish your company’s core values? Advocate as forceful as possible for those who had little representation and were abused and taken advantaged of by the system.

What is the best advice you have ever received? Si no coje consejo no llega a viejo.

What is your favorite thing about working in your field? Winning for those where it appears as if we have been defeated.

What’s one thing people would be surprised to learn about you? I was a terrible student due to my language problems until the age of 15 when I realized that my faith in God would make everything impossible possible because I had no fear.

What would be your number one advice to others in your industry? Be the best you can be since it is the only market that is not crowded.

How do you see your industry changing in the next coming years and how do you advise others to prepare? The energy business is the only market where a new fuel discovery of natural gas and portable nuclear reactors will change the face and cost of electricity.

What advice would you give to others hoping to follow in your footsteps? Demand your rights and think big since it takes as much energy to do a $5 million deal as a $5 billion deal. Just more zeros.

What is your greatest accomplishment? Breaking barriers for Latinos, in the legal profession, judicial profession, housing profession, government positions locally and nationally, and corporate boards.

What’s your biggest mistake? [I was] too naïve to believe that politicians want good government and reform when what they want is patronage.

How do you maintain a good work/life balance? My wife encourages me to seek out my parents regularly and rest on the weekends, otherwise, I turn into a workaholic.

What was your first leadership experience? I was an executive trainee at Gimbel Bros. in New York and, after law school, the executive director of the Spanish Merchants Association of Philadelphia.

How does where you’re from define you? Puerto Ricans are the poorest of the Latino communities in the United States and I need to open doors for all Latinos and oppressed communities so that they can also incorporate us into the guarantees of our Constitution: life, liberty, and the pursuit of happiness.

What lesson did you learn from your first job that still applies today? Hard work, ethics, honesty, integrity, and a deep faith that God will see me through so that others can benefit. There are too many people cutting corners, we should take pride and seek respect for wonderful person that God made in His image and likeness.

More with Nelson Diaz, cover story: The Man, The Legend, The Lesson

“I didn’t know there was a term for feminists, but I knew I was one.”

From Cuba, with Dignity