You’ve been with MLB for eight years now. What are the major issues that you’ve seen emerge in that time?
Over the last eight years, the drug program certainly has evolved quite a bit. When I first started in 2007, it was about six months before the Mitchell Report came out. That was certainly a catalyst for a lot of changes that were made—both in terms of program testing, to make it more stringent, but also in terms of instituting new practices, procedures, and even a new department for the purpose of catching and disciplining offenders even without a positive test and with only non-analytical evidence. The public saw the latter in action two years ago when MLB suspended 15 players for violating the drug program without a single positive test. Our drug program is now widely hailed as the best in professional sports, and a lot of people deserve credit for that—not only in the commissioner’s office, but at the players association as well. To their credit, the union has been very cooperative in renegotiating and improving the program to be responsive to changes in substances and science pretty much on a regular basis, and this is one area where we tend not to wait every five years to reach a new deal.

We have also grown with technology over the last eight years, and instant replay has been a game-changer in particular. Around the time that I started, we were only reviewing boundary home run calls at the umpire’s discretion. Now, the vast majority of calls made on the field are reviewable under a challenge system. There were years of debate about the obstacles and potential pitfalls of going to a robust replay system—everything from the delay-of-game to the difficulty in placing runners—but numerous people put a lot of effort into creating the rules and regulations, and the system has worked extremely well in its first two years. It’s an evolving situation with tweaks on the margins, but one that we think has greatly benefited the clubs, players, and even umpires. We’ve negotiated tirelessly with the umpires’ union over the replay system, and one thing I’ve learned is that nobody wants to get each call right more than they do. They have an incredibly difficult and pressure-filled job, and, to their credit, if a super slow-motion camera shows that a call on the field should be overturned, they want to do it.

There have been a lot of major issues over the years, but those are the two that I’d say stick out the most for me.

Your job title expanded earlier this year to include HR duties. What changes has this brought to your day-to-day?
I already was the lead lawyer in the labor relations department, providing day-to-day employment law advice and handling any internal investigations, so that part is the same. It’s one thing to give advice and counsel, however, and it’s another thing to actually be responsible to make sure that the systems and the processes are the best that they can be. I’m very much thankful for and excited about the opportunity to help optimize our workplace so that the commissioner’s office can provide the highest level of service to our clubs and fans.

Another interesting and different aspect to this is that commissioner Manfred, as the new top leader, has made it a priority to integrate the business side of baseball among our various local entities as much as possible.

We’ve always had the commissioner’s office on Park Avenue [in New York City], which also housed MLB Properties as a revenue-generating licensing-and-sponsorship arm that serves the 30 clubs. But we also have MLB Advanced Media, which runs a terrific website and baseball game streaming service, but also thinks far beyond baseball and has been an enormously successful enterprise as a technology company in general. For example, they handle streaming content now for HBO, the WWE, ESPN, and others. We’re trying to integrate functions with them and with the MLB Network, which also has been successful since launching in 2008, in order to not only ensure efficiency, but also to ensure that that MLB’s business strategy is unified. That’s been the vision of our new commissioner, and one of my main jobs this year has been to help him effectuate that by navigating all the legal and HR issues that come with a complex partial integration of companies with differing histories and missions.

General counsel responsibilities do often tend to naturally bleed into HR. Did you find that this was mostly familiar territory already?
Definitely. The substantive part of the HR role is very comfortable for me because I have been dealing with the employment law issues for as long as I’ve been here—and for five years before that as a labor lawyer at a firm. So on that front, the main difference is that now I have to take my own advice instead of just giving it to someone else.

What’s important to keep in mind when you switch between so many hats?
I still have my labor and legal roles, which involve managing employment litigations, negotiating with both unions, and things of that nature. The HR role is certainly different, but I do think everything boils down to the same lawyer-oriented philosophy of client service with Major League Baseball as my client. In both the legal and HR roles, the main goal is to protect the company. From the HR standpoint, however, I also realize that my client really consists of all the people who work in it, and so it’s my job to provide them with good customer service at the individual level as well. I believe that as long as I approach my job with the goal of being responsive, thoughtful, and respectful, I’ll have the best chance to handle whatever comes up—regardless of which hat I’m wearing at the time.

“I believe that as long as I approach my job with the goal of being responsive, thoughtful, and respectful, I’ll have the best chance to handle whatever comes up—regardless of which hat I’m wearing at the time.” 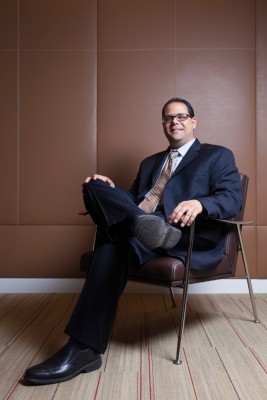 Does the new commissioner’s vision include any new initiatives in diversity and inclusion?
Yes—it is a goal of the new commissioner to make sure that we have as diverse a work pool as we can within our office. In fact, just recently, he made our parental paid leave policy more generous and, aside from simply being family friendly, one of the reasons for doing that is to retain and attract a diverse group of employees. We also put together a diversity business summit, which is organized by our diversity and strategic alliances department and which gets the commissioner’s office, the clubs, diverse suppliers and vendors, and diverse applicants for employment all together to congregate in one place for a multi-day conference. This helps the commissioner’s office and the club build their bases of minority-owned business relationships and pool of candidates for current and future positions.

Also, at the club level, I know that he wants to make sure that, whenever possible, diverse qualified candidates have the opportunity to interview for key positions in baseball operations, such as field manager, general manager, and assistant general manager. This is not a new policy, per se, but I know that he has taken a special interest in enforcement and helping to identify candidates who can move up the ranks because it starts with being able to get into the lower- to mid-level positions that ultimately help a person get the requisite experience for the higher-level positions covered by the policy.

Your first degree, from St. John’s University, was in philosophy. How did you cross over into law?
Well, it was either become a lawyer or a philosopher [laughs]. When you major in philosophy, there aren’t too many options. But St. John’s does require you to take certain philosophy classes as a prerequisite, and I enjoyed them. I think it really comes down to an inherent desire for the search for truth and justice in this world. So having that background, and that rationale for wanting to study philosophy in the first place, does sort of transition naturally into a legal career. That’s why I think I ended up leaning more towards litigation as well, as opposed to corporate law—because my interest is really in asking questions, investigating, and searching for the truth.

Were you a Mets fan growing up?
Well, I call myself a New York fan. It’s interesting—I grew up on Long Island, where it was easier to get to the old Shea Stadium, and a lot of the people around me were Mets fans. The Mets were also very good in the mid-’80s, winning the World Series in 1986, and I was definitely rooting hard for them.

But my dad, who moved to New York City from the Dominican Republic when he was eight years old, is a humungous Yankees fan—the kind who would have to completely avoid the back pages of the newspaper in the morning if the Yankees had lost a regular season game in the middle of May the night before—so he also had me watching Yankees games all the time, too. Don Mattingly actually was my hands-down favorite player growing up, and like a lot of New Yorkers, I admired him not only for his offensive and defensive talent but also for his grit. Although I remember the 1995 postseason for the Yankees losing a 2-0 lead to Ken Griffey, Jr. and the Seattle Mariners, I also remember it fondly because Mattingly had waited his whole career to make it to the postseason, and he was amazing in that series. So I definitely rooted for both the Mets and Yankees, and during my formative years they didn’t play each other in games that counted, so I never felt like I had to choose—despite the peer pressure [laughs].

What are you proudest of since joining MLB?
I suppose that I’ve simply taken pride in being able to handle issues that have gone beyond what I could have imagined as an advice-giving, negotiating, and litigating lawyer. Whether it’s being involved in the crafting of procedures for how instant replay should work, dealing with unique issues and uncooperative non-baseball witnesses as part of a very public drug investigation, or now being able to have a more direct impact on how our central office operates, it’s an honor to be able to regularly work on matters that the fans care about. I’m very fortunate that MLB—and commissioner Manfred and chief legal officer Dan Halem, in particular—has had faith and given me the opportunity to do that.