Few people can remember the instant they decided to spend the rest of their lives practicing law. For most, it just made the most academic and financial sense. Not so for Derek León. Hispanic Executive sat down with the civil-litigation attorney to hear about the spark that set his life on a journey from a simulated high school courtroom to the offices of a venerated law firms to, at last, the keys to his own practice.

I’ve wanted to be a lawyer since my senior year of high school. I remember I was in a Law Studies class, and my teacher was staging a mock criminal trial about a supposedly stolen article in the classroom. She selected me to be one of the cross-examining attorneys.

Success
Being the husband, father, son, and brother my family deserves.

Family
The core. Why we exist. The key to immortality is having children, raising them to be good and productive members of society.

Pro bono
Important, rewarding, fulfilling. As a lawyer you can help the indigent. You can seek justice. And it doesn’t take much to pick up a phone and help someone.

Integrity
The standard that I strive to uphold every day. Not always easy. At the end of the day, the only judge that matters is the one in the mirror.

One of my good friends (who was on the football team with me) was the accused, and the cross examination became pretty heated. I was a fairly laid-back guy, but when I got to the stand there was a switch that turned on for me that I didn’t realize I had. In the critical moment, a fire alarm went off and we needed to leave the classroom. But I stood up and yelled at him, “You’re not going anywhere!” And the teacher told me I should probably step out of character.

The alarm kept the “jury” from ever deliberating, but I couldn’t get the feeling out of my system. Later, at practice, I joked with him that I felt he belonged behind bars. I distinctly remember that was the moment I caught the bug.

In 1962, my grandparents from both sides sent my parents away to the United States after Fidel Castro took over Cuba. My mom and dad thought it was going to be a six-month vacation. But, 50 years later, they’ve made a life for themselves and their family. They had to grow up fast, and they sacrificed an incredible amount, yet they were also enormously successful themselves and both became doctors. The beauty of it is that my story is not unique, especially in Miami. Here, most children of Cuban immigrants grew in hard-working families that succeeded despite challenging circumstances. 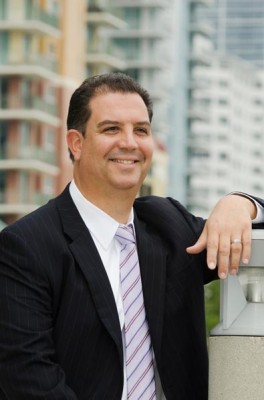 After I finished law school I worked in Houston at Bracewell & Patterson, an old-world firm with a well-respected, white-shoe reputation. Through sheer luck, I had the opportunity to first-chair a couple of trials as a very young lawyer and sprouted my wings as a civil litigator. Eventually, I moved back to Miami for a firm called Morgan, Lewis & Bockius (MLB), which was founded by Civil War veterans in 1873. Together, my colleagues and I built one of the strongest offices in this market.

When I thought about the next 20 years, I realized that if I wanted to set out on my own, it needed to happen now. Scott Cosgrove was one of the first people I met when I came back to Miami. Our wives were friends, and over the years we’ve all become very close. With a guy like Scott, you quickly realize that he’s not only someone you want to barbecue with and raise your kids alongside, but he’s also an incredibly capable lawyer. We kept trying to steal each other away from our respective firms, and finally we decided to start our own practice.

The conversation with my wife, Alina, was by far the most important consideration I made making the leap. And what surprised me was how quick she was to endorse it. I couldn’t—and wouldn’t—have done this without her support. My last day at MLB was a Friday, and Scott and I were hard at work by Saturday morning. Our goal is to become a truly exceptional civil-litigation boutique. Of course, there are growing pains: when you start your own business, you realize that you’re not only the boss, but the IT guy, too. But at least your issues are your issues, and that makes you all the more motivated. I tell Alina, “I’m headed toward a storm at work today, and I couldn’t be more excited.”

Philanthropy has become extremely important to me, but it didn’t start that way. My focus at the beginning was simply on working harder and delivering better work than anyone in my peer group. And that’s okay, but there comes a point when you realize you need to give back. When I got to Miami I wanted to start a version of LegalLine, which was a hotline in Houston you could call for free anonymous counsel and speak to the foremost legal minds in the county without knowing it. It was my first foray into starting something from scratch, and somewhere in that process, I became invested in what is truly at the foundation of our profession: pro-bono work.

For the same reasons, I’m serving as the general counsel to the Congressional Hispanic Caucus Institute, whose board consists of Hispanic congressional leaders and senior executives of Fortune 500 companies. The mission is to develop Latino leaders across the country through scholarships and internships for underprivileged, but outstanding students. I look at the résumés of these kids, who are often maintaining a 4.0 GPA while they’re holding down a job to help feed their families, and it hits me that this is one of the most rewarding things I can be doing.

“I’m very close with my brother, Derek León. We have always been close, but our relationship changed for the better once we both graduated from college and became peers. Today, he’s one of my biggest inspirations. He has a tremendous amount of courage and tenacity, and everything he does, he does with dignity.”

All the way back when I was in undergrad, I sought out the advice of one of my adjunct professors, who was a practicing attorney. He tried to discourage me from going in to law because the field had become saturated. I remember saying in a very respectful way, “There might be a lot of lawyers, but there aren’t a lot of exceptional lawyers.” And that’s what we have set out to be.

Look, if I open the window and they’re not shooting at me, it’s a good day.

Putting Skin in the Game