Gracie Inacay of Harris Associates LP explains why in tough times, she partners with management to ensure the company honors its commitment to people and culture

When the economic downturn sent the financial markets into a downward spiral in 2008 and 2009, the management of Chicago-based asset manager Harris Associates LP knew it would be a challenge to maintain generous benefits, but it was committed to doing so—and without any layoffs. “The conversation from the top down was, ‘Look, times are tough,’” recalls Gracie Inacay, director of human resources for Harris Associates LP. “When people leave, we will defer replacing them, and we aren’t going to be able to give out bonuses. As a result, we’re asking everyone to work harder and do a lot more. But, we won’t have layoffs.”

Inacay and her four-person HR team, which serves as a strategic business partner to the company, played a key role in that communication. “As much as HR wants to push an idea, if it doesn’t come from the top down, it’s a losing battle,” Inacay says. “What we are responsible for is taking the idea, embracing it, and communicating it throughout the organization.”

In that case, the concept and communication were on point. “We said we wouldn’t have layoffs, and we didn’t,” says Inacay, who attributes her success helping Harris Associates navigate the troubled times to an understanding of the role HR has come to play in a company. “HR is a resource to the organization and the people within it,” Inacay says. “We work with managers so that we know what’s going on and can anticipate labor needs; we recruit appropriate candidates; we onboard hired employees to get them up to speed on the way the organization works; and we continue to act as an advocate to those employees.”

Inacay didn’t always plan to work in human resources. A first-generation American raised by a single mother in the Little Village neighborhood of Chicago, Inacay lived with her grandparents and three of her mother’s younger siblings. The full house made for plenty of fun, but didn’t allow for much educational guidance. “My mom couldn’t sit down and help me with my homework because she was working, and when I graduated from high school, I had no idea what I wanted to be when I grew up,” she recalls. 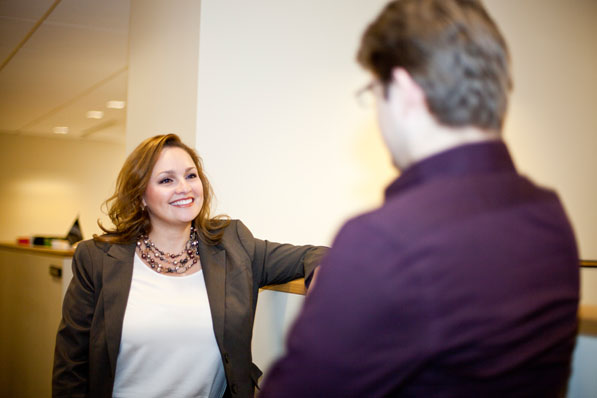 Inacay began studying at the University of Illinois at Chicago (UIC) while working part-time for Insure One. The workload was heavy, though. “I was pulling a full schedule at UIC and working 35 hours a week, so I decided to take a semester off and work full-time,” she says. “That semester turned into six years, but it introduced me to HR. I had a great manager who talked to me about career options, and when a position opened in Insure One’s HR department, he encouraged me to pursue it.”

1.
Remain abreast of changes. The industry is always changing. There are new regulations, legal cases, and social changes, all of which result in workplace changes.

2.
Don’t reinvent the wheel. Mentors have been important to me. Learn from them.

3.
Networking is important. Being part of several HR round tables offers me the opportunity to share my knowledge and gain other HR professionals’ perspectives.

Inacay got the job, and loved it. “I was a sponge,” she recalls. “I said, ‘Give me the projects no one else wants.’ I wanted to learn.” Along the way, however, Inacay realized that if she wanted to progress, she’d need a degree, so she returned to Chicago’s Roosevelt University, which offered an accelerated program, where she majored in HR. “Having had real-life experience in HR then going back into the classroom and learning about it in books was a huge benefit, because I knew how the things I was learning were used in the real world,” she says.

By the time she graduated with honors in 1999, Inacay was already an HR manager at First Variable Life—a financial-services firm that sold variable-life products but also operated as a money manager and broker-dealer. When First Variable Life closed in 2001, she was primed for a position at Harris Associates LP, an asset-management firm that oversees separately managed accounts for high-net-worth individuals and institutions. What appealed to her was the family-friendly culture. “The company wants to take care of its employees, so it strives to offer competitive wages and the best benefits it can afford, from top-of-the-line health insurance to soup and salad catered in for lunch every day,” Inacay says.

Eleven years later, Inacay is still at Harris Associates, a longevity that she attributes to the impact she’s able to make. “When I left Insure One, it had almost 1,000 employees, and I found that it was too much,” she says. “At Harris Associates, we have around 170, and that gives me the opportunity to really get to know people. When I know who the players are throughout the organization and what needs to get done, I can be a strategic partner to management and an advocate for employees, and I can really make a difference.”

The Man, The Legend, The Lesson