Cuban-native Yolanda Nader, CEO and CFO of Dosal, leads the fight to ward off competitors seeking to shut her company down. 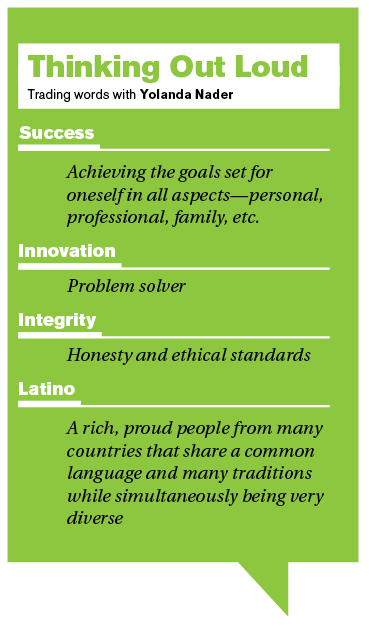 Yolanda Nader’s family immigrated to the United States from Cuba in 1962, when she was three years old, in pursuit of freedom. In her youth, she aspired to be a lawyer. Although she opted for an MBA, her executive career has kept her close to the courthouse. Today, one of her biggest challenges is protecting her Miami-based company from competitors seeking to shut it down.

It’s hard to promote fair play in a demonized industry. “Obviously, cigarettes are hated by everyone,” says Nader, CEO and CFO of Dosal Tobacco Corp. But smoking is a personal decision, she argues, and requires personal—not governmental—accountability. Her father lit up Dosal’s Cuban-blend cigarettes for years, and although he suffered from emphysema, she doesn’t blame the manufacturer. “No one forces a cigarette on you any more than a Big Mac … Smoking, alcohol, fast food—as long as it’s legal, I believe in freedom of choice.”

While Nader doesn’t expect love for her business, she demands fairness when it comes to the law and taxes. A certified public accountant, with a 10-year tenure at the IRS, Nader was later plucked from an accounting firm, KPMG, LLP, in 2002 to run Dosal. She soon realized the family-owned business was trapped in a post-litigation pressure cooker. As a focused, goal-driven executive—who has worked full-time since she was 15—Nader didn’t wince when things began to boil over.

Since 2004, she has led Dosal in fending off a tax targeting certain tobacco manufacturers. The battle traces back to 1996, when the state of Florida sued the nation’s four largest cigarette manufacturers and Dosal Tobacco Corp. Initially, Dosal was among the companies accused of bad practices (such as lying about the dangers of cigarettes, advertising to minors, creating “false science,” etc.), but it was dismissed from the lawsuit after an investigation revealed it did not participate in the acts. The other firms settled in 1997, agreeing to pay Florida roughly $440 million annually, according to Nader.

Since then, “big tobacco” firms have campaigned in Florida (and three other states that settled outside a large national agreement) to impose a fee on local manufacturers that did not participate in state settlements, she says. They have fought doggedly to enforce a special tax on these nonparticipating firms equivalent to the larger companies’ settlement payments. (Minnesota and Mississippi have enacted the tax while Texas and Florida have held out.) In states where the tax has been levied, companies like Dosal have been put out of business. In Florida, Nader’s company is the “poster child” of the issue, which is known as the “Dosal tax.”

Dosal is a virtually unadvertised “under-the-counter” label for smokers who ask the clerk for the lowest-priced pack. The proposed $5-per-carton tax would raise its retail price by $7 or $8, while exempting big manufacturers from any new tax. For a low-cost leader, this hike would mean bankruptcy. “Sometimes we don’t raise the price for two or three years at a time, in spite of increases in raw materials and other operational costs,” Nader says. “To raise 25 cents a carton is a momentous occasion—and that’s 2.5 cents a pack. Now they’re trying to hit us with 50 cents a pack.”

Each year, when the Dosal tax is proposed, Nader and her lobbyists tell legislators: “This is only about market share. They want to put us out of business.” Dosal is up against heavyweights such as Phillip Morris USA (maker of the top-selling Marlboro brand), with 50 percent national market share, and R. J. Reynolds Tobacco, which sells Camel and less-expensive brands that compete with Dosal, such as Pall Mall. “The smoker is going to smoke,” Nader says, “if they don’t have our product, they’ll buy another.”

Florida lawmakers are lured by the prospect of earning $100 million in new revenue from the proposed Dosal tax. But if the company shuts its doors—and Nader argues that it would, if unable to compete on price—the state would get nothing. In fact, it would lose money by pink-slipping 300 employees employed by Dosal and its distributors. Nader explains those jobs would go to states where Big Tobacco operates. Moreover, the state would have to shoulder health-care costs for the laid-off workers, many of whom do not speak English and would be hard-pressed to find jobs in a depressed economy. (Dosal pays workers double Florida’s minimum-wage rate, covers 100 percent of the health-insurance premium for all employees, and has a fully funded 401k pension and profit-sharing plan.)

Nader’s determination has held big manufacturers at bay. Her business strategy and accounting skills have helped grow the company’s market share despite a tough market and growing pressure from activists to eliminate her industry altogether. She has no intention of backing down. “I truly believe in the principles of this country,” she says. “We have a constitution and laws to protect us against monopolies. That’s what motivates me to continue to fight.”