Some businessmen seek a one-size-fits-all solution. Juan Carlos Gomez finds beauty in the opposite, which is why he’s making strides as Epson America’s director of Latin American finance 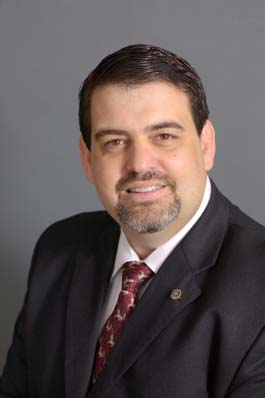 With a flare for finding efficiencies and a finance background bolstered by work with powerhouses like Motorola and Draftfcb, Juan Carlos Gomez views finance as the backbone of an enterprise’s operations. His title is not ambassador, but as director of Latin American finance for Epson America, he is ensuring the global tech company is informed and intentional in its interactions with Latin America. The continent south of Mexico is often assumed as a homogenous entity, but as Gomez understands, it is a tapestry of cultures, partners, and regulations to be considered uniquely. What’s in his queue now: supporting the business by implementing new technology, streamlining processes and policies, and giving the corporation’s credit insurance some muscle.

Most businessmen can remember their first tailored suit. The decision to make the investment, the shopping around for the right tailor, the customization—and, of course, the debut. It’s more than a transaction, but a representation of transition into the next echelon of their careers. In a similar way, when a company makes the transition from a less sophisticated ERP to SAP, it is one way of stating, “We’ve made it.”

When Gomez joined Epson America in 2011, he brought with him experience in working with the leading enterprise software, knew its potential to spark growth, and felt the tech company was primed for implementation. “In the modern world, companies must have information at their fingertips,” Gomez says. “More data available for analysis allow us to quickly identify bottlenecks or issues that could impact our customers and nimbly address them.”

SAP’s strength is its inclusiveness. It maps the entire business cycle, but avoids redundancies. It can show trends in the sale of products just as it can flag irregular expenditures, help us control taxes, and assist in compliance with regulations. Bringing all these factors and more to the forefront, the solution will allow Epson to make the right decisions to continue growing without proportional increases in costs.

What is your favorite Latin American dish, and where would you go to get it? All food in Latin America is great. The variety and flavors are endless, from Mexico to Argentina. If I were going to be specific, the Rodizio from Brazil is great, and you can have it in many formats and locations internationally. My favorite is Fogo de Chao, which is a Brazilian restaurant chain present in major cities of Brazil, the United States, and worldwide.

What is your favorite book?  I have many; however, the book that impacted me the most was Don Quixote, which is a classic that should be read three times in your life: once in your early years, as you will perceive it as a great adventure; the second time in your adult years, where you will experience it as a novel; and lastly when you get to your senior years, when it will feel like a tragedy.

Numbers may seem like a universal language, but the first rule of international business—to appreciate cultural differences and respect local customs—applies just as much to Gomez in the finance function as it does to his peers working in people-to-people roles. While Gomez is less concerned with etiquette faux pas, a big focus of his is compliance. Doing business among Epson’s eight Latin American subsidiaries introduces a lot of complexity to guarantee compliance with the countries’ federal, state, and local regulations—noncompliance could be a costly misstep—but not having a standardized approach to every type of transaction can complicate matters while wasting resources like manpower and time.

“As a financial analyst, I’m always looking at running the business in an organized fashion despite being on different systems in different environments,” Gomez says. “In order to do that, we need centralized policies and processes.”

Through the standardization efforts, Gomez has been able to narrow down procedures to protocols that cover all the scenarios and conditions Epson associates might face in Latin America. “Having a centralized process allows our local workforce to concentrate on their core activities of marketing and selling instead of, for example, signing checks and making payments,” Gomez says.

While many of the obstacles Gomez faces in managing the finances of international business are relatively abstract (you can’t hold a regulation or quantify a modus operandi), some are physical and pose equally important challenges to efficient business. The geography of Latin America, particularly in places like Brazil where the country’s geographic area accounts for nearly half of its respective continent, is such that business relies heavily on travel, particularly air transport. It is a necessary but significant expense that can easily become overpriced when its management isn’t measured. Without a standard policy and, more importantly, a way to enforce it, Gomez realized Epson could be vulnerable to frivolous expenditures and potentially be missing out on corporate deals it might establish with airlines and hotel chains.

“We are already automated at the transaction level through Concur [Technologies], an expense solution,” Gomez says. “But this is the first time we have deployed a consistent global travel and entertainment policy to not only ensure compliance, but also to improve procurement negotiations with our travel suppliers.”

For any sizeable investment, it’s important to have a plan to weather the worst-case scenario. Like fire insurance for a building, Epson’s credit insurance ensures the company can withstand a cash catastrophe—and helps Gomez sleep better at night, he jokes.

In Latin America specifically, Epson once had an array of credit policies, and some countries were not covered. Consolidating into two policies—one for Brazil and one for the rest of Latin America—Gomez put in place the framework for strict credit analyses and strong recovery to mitigate risk in an inherently risky market.