It seems we can’t go anywhere or do anything without hearing about the rise of Web3. From cryptocurrencies to NFTs to all kinds of other interesting concepts, it’s clear that the conversations around these happenings aren’t going away any time soon. 💡

To this end, we reached out to members of the NextGen Collective comunidad for their insights on these topics, and they were so kind as to share some much-appreciated basics. Please note: NextGen Collective is not endorsing one way or the other. This is all purely informational. At the very least, you’ll have more information to keep yourself in the loop and look good at parties. (Remember those?)

Here are some basics on cryptocurrency from Latinx to Watch Soribel Feliz:

What is cryptocurrency, in a nutshell?

Simply put, a cryptocurrency (or “crypto”) is a digital currency that can be used as a form of payment to exchange goods and services online. It is a form of payment that can circulate without the need for a central monetary authority such as a government or a bank. Instead, a cryptocurrency uses an online ledger with strong cryptography that enables people to make secure online transactions.

How does cryptocurrency work?

What are the benefits of cryptocurrency?

Cryptocurrency removes most problems of modern banking: there are no limits to the funds you can transfer, you can make transactions at any time of the day or night, and there are no limits on purchases and withdrawals. Most relevant to our community is the fact that anyone is free to use cryptocurrency. Setting up a bank account, on the other hand, requires documentation and extensive paperwork, among other requirements. International cryptocurrency transactions are faster than wire transfers too. Wire transfers take about half a day for the money to be moved from one place to another. With cryptocurrencies, transactions take only a matter of minutes or even seconds.

An important benefit of crypto is that it is a hedge against inflation. When central banks manage the money supply, they tend to (over time) reduce the value of money by printing lots of it, thus igniting inflation. When inflation rises, the value of money depreciates. With cryptocurrencies, especially Bitcoin, investors can protect themselves from inflation because it is limited in supply, like gold. Nowadays, Bitcoin is often perceived as an even better store of value than gold, since it is not tied to a particular currency or economy, not controlled by a small group of companies or stakeholders, and is easily transferable.

What are the drawbacks?

Despite the benefits of cryptocurrencies, there are many drawbacks. For one, there is high volatility and the potential for large losses. The gains can be exhilarating, but the price drops can be stroke-inducing. You have to be ready to lose most or all of the funds you have invested.

Moreover, there is still very little regulation and consumer protections for cryptocurrencies. If an unscrupulous actor steals your investments, if a hard drive crashes, or if a virus corrupts your data, federal authorities cannot help you. Recently, crypto exchange Bitmart lost nearly $200 million when hackers compromised their blockchains. While the company promised to compensate victims, that is an exception, not the norm. Additionally, despite their increasing popularity, cryptocurrencies are still not widely accepted; only a small group of merchants will exchange their goods and services for digital currencies.

What should people keep in mind if they want to get involved with cryptocurrency?

Do your own research and determine whether investing in crypto is for you. Again, the gains can be exhilarating, but the losses can be heartbreaking. Nonetheless, keep in mind that cryptocurrencies are here to stay and that they can provide protection from inflation, especially in a post-pandemic world. Cryptos are one of several financial tools that provide much-needed diversification in your portfolio, along with stocks, bonds, real estate, and cash reserves.

To what extent is cryptocurrency being adopted by the Hispanic community? Is there any official data to cite?

From my own personal experience, I know that Hispanics were some of the earliest adopters of cryptocurrencies. However, in the early days (2010-2015), there was so little knowledge and information and so much misinformation that those people sold their crypto, lost it, or forgot about it. Cryptocurrencies were thought to be the domain of money-laundering and terrorist financing networks; it was seen as a Ponzi scheme. Shortly after, crypto went more mainstream and unfortunately, the Hispanic community missed out on most of the gains of the last few years. Nonetheless, a recent Pew Research survey found that Blacks and Hispanics are more likely than whites to say they have ever invested in, traded, or used a cryptocurrency. Latinx communities in the United States have some of the highest rates of crypto adoption, with approximately 31 percent of Hispanics owning Bitcoin. A University of Chicago survey found that 44 percent of Americans who had purchased or traded crypto were non-white and that 35 percent had annual incomes of less than $60,000.

There are many reasons behind this impressive rate of adoption, not least of which is the fact that this group has less access to traditional wealth. In 2016, Latinx families held less than one-sixth the wealth of white families and were several times more likely to support family members not living with them.

How can cryptocurrency benefit the Hispanic community?

Cryptocurrency can benefit the Hispanic community in many ways. The first one to come to mind is payments and remittances. Many in our community (my own family included) usually help relatives still living in their countries of origin, so sending money in a quick, easy, and cheap way is a game-changer. Also, crypto would benefit immigrant communities greatly by allowing them to pay for goods and services anywhere in the world without endless paperwork, unnecessary fees, and long wait times. Some technology companies have seen this need and are already capitalizing on this market opportunity.

Secondly, Hispanics are more likely to be working-class and have lower household incomes and as a result, many do not use banks and are underserved by traditional financial institutions. Because they do not have a central authority like a bank that is controlling their funds, they can bypass fees, unfair credit ratings, high interest rates, and predatory lending practices, as we saw during the subprime mortgage crisis. Thirdly, the US stock market, one of the main generational wealth-building tools, is overwhelmingly white: fewer than 10 percent of Hispanics own stocks, and the value of what they own is much lower compared to that which is owned by whites. Decentralized finance, or DeFi, the concept on which cryptocurrency is based, can greatly benefit the Hispanic community: it can help Hispanics bypass banks and their credit checks, minimum balance requirements, excessive fees, and discriminatory practices, and it can help empower people to have a say over their financial lives.

Are you involved in cryptocurrency? If so, how did you get involved and what changes has it brought in your own life?

I got involved in cryptocurrency almost three years ago when a friend insisted, and practically begged me to look into it. At the time, I thought Bitcoin was too expensive at almost $4,000, so I decided to invest in cheaper currencies (e.g., Ethereum and Chainlink). I bought Ethereum when it was less than $200 but then sold it to buy Chainlink, which was about $1 at the time. Instead of doing my research, I listened to what financial “experts” had to say about crypto. Jamie Dimon and Warren Buffett declared cryptocurrency a fad and a scam so I stopped investing and forgot about it, including my password! Two years later, I opened my Coinbase app and saw that my initial investment ($600 to $700) had more than quadrupled to about 3,500. I started paying attention again and doing my own research and now I invest a little bit (never more than $100) in coins that I have researched well and which I trust.

The changes crypto has brought to my life are more personal than monetary. I now know that I shouldn’t just trust “financial experts” so blindly. While Jamie Dimon was claiming crypto was a fad, JPMorgan was staffing up its blockchain asset management division, which now employs more than two hundred people. Cryptocurrencies cannot be ignored; they are part of an ongoing financial revolution that will change the way we live, work, and play. It is paramount for me to learn as much as I can so I can then help educate Black and brown communities so that they don’t get left behind. My vision is for these communities for them to be more than passive consumers of whatever products wealthy investors sell them: I want these communities to be creators, thought leaders, visionaries—to have a stake in things. I want them to take part in and be part of this wealth-creation tool that has brought many riches to people who already have so much.

I’ve also realized the importance of balance and diversification for investments. I’ve seen people in Hispanic communities completely ignore and bash crypto for its volatility and their own lack of understanding, but I’ve also seen people cash out their life savings to put it all in crypto. Neither of those approaches is good: I want to be a trusted voice of reason and tell people that while you should embrace crypto, you should not put 100 percent of your money in it! You should still have cash for emergencies, and save for a house and for retirement. Then, invest in crypto only whatever you’re willing to lose in it.

See the Pew Research Center’s 2021 survey about Americans’ use of cryptocurrency here. 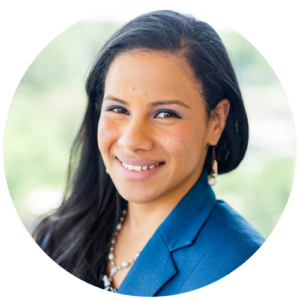 Soribel Feliz is currently a project manager at a leading tech company. Before this, she was a Foreign Service Officer for the US Department of State, where she served in a variety of roles, including as bilateral relationship manager for Sri Lanka and Maldives and as chief of staff to the director of fraud prevention programs in the Bureau of Consular Affairs. In her capacity as a diplomat, Soribel served the United States in two overseas posts: Bucharest, Romania (where she worked as an economic officer), and in Sao Paulo, Brazil (where she was a consular officer). After graduating from CUNY-Brooklyn College, she worked briefly at the House Foreign Affairs Committee while taking graduate-level courses in political management at the George Washington University. Shortly after, she decided to attend graduate school at the Maxwell School at Syracuse University, where she earned master’s degrees in public administration and economics. Originally from NYC, Soribel is back in New York after a ten-year hiatus while preparing for her next move, this time, domestically.