As head of human resources for the Americas in its private-banking division, Beatriz O’Malley is helping Swiss bank Credit Suisse look beyond the bottom line to its greatest asset:  its people

Profits often drive people in the financial-services industry. But Beatriz “Bea” Olavarria O’Malley believes it should be the other way around. “It’s people who run an organization at the end of the day,” says O’Malley, head of human resources for the Americas in the private-banking division of Swiss bank Credit Suisse. “In the financial-services industry, we don’t manufacture anything. The capital we have is human capital.”

Currently based in New York, O’Malley was born and raised in Brooklyn, where her parents moved to from Puerto Rico in the 1950s. There, she learned how important it is for employers to take care of their employees. “My father was a working-class guy who moved here knowing no English,” she says. “He worked for the New York City Department of Parks & Recreation for more than 30 years, which was a union job. His union helped our family survive because of the great benefits they gave him.”

1.
Make sure your culture is linked to and supports the vision, mission, and strategic goals of the company.

2.
Cultivate a culture that is people-generated with regards to how employees organize their work, conduct business, and relate to leadership.

3.
Understand the value of a strong culture, which fosters a more cohesive, motivated, engaged workforce that yields higher profitability and market value.

Although she wanted to become a lawyer, O’Malley became interested in human resources as an undergraduate at Cornell University’s School of Industrial and Labor Relations. “For more than four years at Cornell, I was exposed to what human resources was, and it was very interesting to me,” says O’Malley, who began her career in campus recruitment at Ernst & Young in 1988. “I went into recruiting because I enjoyed matching the right people to the right roles and trying to find the person who’s going to be the most successful. That’s been a theme throughout my entire career.”

O’Malley’s next major move came in 1993, when she joined Citibank in its growing equipment-finance leasing division. Because a large part of her job was integrating new employees by way of mergers and acquisitions, it’s where she first learned the concept of “talent management”—of which she’s now a faithful devotee. “Talent management is looking at your current talent, what key roles you have, and what your skills gaps are,” O’Malley explains. “It’s having long conversations at the management level about what your succession plan is for key roles and how you’re going to develop and retain talent to fill them. It really helps management fulfill their business strategy and achieve their business plan.”

In 2001, O’Malley—who has two children—took a three-year sabbatical to focus full-time on motherhood. When she returned to the workforce in 2004, it was as human resources director in Credit Suisse’s investment-banking division. “The financial-services industry has historically had a reputation for being more cautious in adopting cutting-edge HR practices,” O’Malley says. “We’ve progressed tremendously.”

In pursuit of a more progressive HR role, O’Malley accepted a position in 2006 as senior global HR business partner with XL Capital, a Bermuda-based insurance company. “It was great work—interesting work—because I globally supported the CFO and his team, which was creating HR practices from scratch,” she says. “The CFO was very progressive with regards to talent management—making sure we understood on a global level who our talent was and how we could develop them to the extent that they’d be ready for their next role.”

When the economic downturn hit, O’Malley’s role turned from developing XL’s workforce to downsizing it. So in 2010, she returned to Credit Suisse, assuming her present role in 2012. This time, HR practices had moved forward.

A Tsunami Is Building—Are You Ready?

“Credit Suisse had recently hired a new global head of HR,” says O’Malley, whose current division includes 1,700 employees based in Switzerland, Latin America, and the United States. “They had been doing talent management, but focusing on the most senior levels. Now they were ready to take it down further into the business.”

O’Malley has played an instrumental role in strengthening talent management within Credit Suisse. One of her current priorities, for instance, is employee retention. “We are constantly striving to retain top talent,” she says. “We are focused on finding the issues that matter most to our employees and doing the best job possible in keeping our talent engaged.”

Another priority is globalization: managing human resources for employees in Switzerland, North America, and South America means constantly reconciling “global” with “local.” “Even though we’re one organization and we strive to have one culture, everything has to be implemented and communicated locally,” O’Malley says. “That requires understanding that people work differently in different places, and have different needs in different locations. It’s my job to balance all of that.”

And yet, balance is a constant struggle—professionally and personally. “I’m a working mom, and sometimes it’s really difficult,” admits O’Malley, who advises young Latinas to always take care of their own needs first. “You have to balance yourself so you can do well in all areas of your life.” 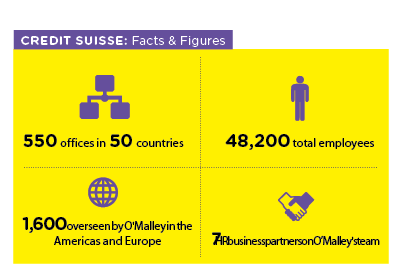 Learn the Business, Help Others Succeed