“I like accounting a lot; it worked out well,” says Chris Guzman, chief financial officer of Inktel Holdings Corporation.

Although she grew up in a family of accountants, Guzman dreamed of becoming a singer-songwriter. “I felt inspired by the messages,” she says. “Music has the ability to alter people’s moods and inspire them.” She remembers connecting deeply to inspirational messages in music and wanting to do the same for others.

Her love of music has never waned, but after having her daughter at age nineteen, Guzman knew she needed a stable career. She followed in her family’s footsteps and decided to study accounting at Florida International University. “College was something I needed to do for both of us,” she says. She later continued with graduate studies in forensic accounting at Southern New Hampshire University.

In the world of finance, she brought that same enthusiasm for inspiring people, which gives her a unique perspective and ability to solve workplace problems. 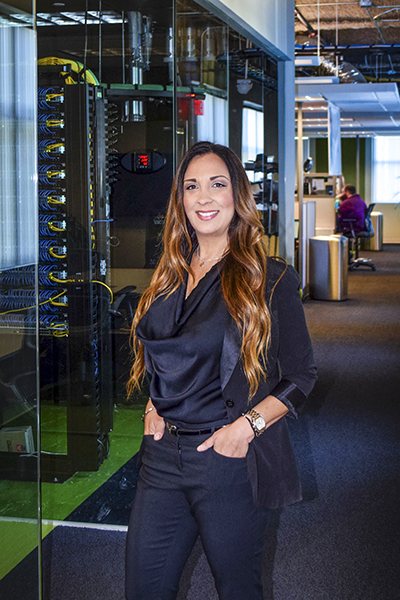 As CFO of Inktel, Guzman directs and manages the accounting, payroll, finance, and human resources teams. One of her biggest goals for running these teams is to empower employees and make back-office operations more efficient and effective.

Founded in 1997, Inktel specializes in world-class, outsourced customer service, innovative product fulfillment, enterprise solutions, and digital marketing. Guzman met CEO Ricky Arriola through a mutual friend in 2014, and the more Guzman spoke with Arriola, the more she was intrigued by Inktel and its company culture, which is centered on helping its employees develop.

After joining the company in 2014, she makes it a point to always ask herself, “What does empowering employees look like, and how do I go about doing this?” In pursuit of this, Guzman advocates for practical, effective methods in the workplace that involve everyone’s ideas.

The first step is hiring the right person for the right role. During her twenty years in the industry, Guzman has found that a potential hire’s positive mental attitude outweighs any set of skills listed on a résumé. She looks for learn-it-alls over know-it-alls. “Most skills can be taught to individuals with the right mental attitude, but it doesn’t exactly work the other way around,” Guzman says. “The right mental attitude means someone’s open to learning and trying new things, and without it, learning capacity starts to hit a ceiling”.

After selecting the right person for the job, Guzman works to make sure the new hire can thrive in their new role and environment, by emphasizing how each member of its team is important and valuable to the company.

“If there’s a disconnect, 99 percent of the time there’s a communication gap ,” Guzman says. So she works with her teams to create action plans for new hires and reference guides regarding company procedures and workflow, but she won’t give any answers per se. Guides will provide pre-established, step-by-step instructions and actionable items that can be measured, but they are intentionally structured to lead to open forums and discussions that set the stage for innovation.

“My objective is always to prepare them to make their own decisions in the future, especially when there isn’t someone to tell them what to do,” Guzman says. “That’s what makes a leader, and that’s what I’m training for. Decision-making comes with a high level of accountability, which is scary and where people tend to hesitate the most. My training and development style is structured around asking so many questions that, during the process, they’re actually finding they already have most of the answers. If I’m always telling people what to do, then the only thing they’ve learned is to come to me for answers. There isn’t any growth or confidence-building in that.”

Guzman then takes it a step further, though, and has those on her teams shadow other teams.

“Not only does this increase my team’s empathy and appreciation for the other person’s contributions to the businesses”, she says, “but it also helps everyone identify areas of opportunity.”

The back-office needs a lot of information and documentation from a lot of different people, so having more information can help streamline those operations. Guzman is focused on alleviating administrative burdens at Inktel to free up employees who need to take care of client needs and drive operations and sales. Valuing each employee’s contributions as part of the processes does a lot to empower them, which is important for workplace morale and vital to the health of the company.

“The more employees feel a connection to the company, the harder they work for it”, Guzman says. “People want to feel like part of the tribe. We can do so much to help employees feel empowered just by reminding them that what they’re doing is part of a really big thing.”

Empowered employees bring insight and creativity to their jobs, and they can lead innovative efforts at companies, but there has to be a platform where ideas are welcomed. Guzman says that everyone is guaranteed to have at least one.

“It’s okay if an idea isn’t accepted or doesn’t work out; you just need to try again in a different way if it’s that important to you,” Guzman says. Growth can only happen if people try new things, she says, and companies need to be innovative if they want to  be competitive.

Companies also have a duty to connect with their surrounding communities and serve others. Inktel has worked with charities, such as  Juvenile Diabetes Research Foundation, Susan G. Komen,  and Best Buddies to name a few. In fact, Guzman led the efforts to coordinate an annual sponsorship of events last year with Best Buddies, an organization dedicated to integrating individuals with intellectual disabilities into the workforce.

“It’s a beautiful organization,” Guzman says. She and employees at Inktel volunteered to work with Buddies to create LinkedIn profiles, help them build their résumés, polish interviewing skills, and give them advice on how to navigate the workplace. They also sponsored a cook-out and “parents tent” at the annual Best Buddies Friendship Walk that year.

It’s establishing relationships like this and connecting with former colleagues that drives Guzman. “The fact that we part ways in the workplace and people still want to connect means a lot,” she says. “We’re capable of anything with an optimistic mind-set.”