Some day, a young adult will look back on his childhood and say they stayed on the straight and narrow path and worked hard because of the leadership skills they learned from the Chivas USA soccer team. And that day would mean more to Jorge Vergara and Antonio Cué Sánchez-Navarro, co-owners of the Los Angeles-based Major League Soccer (MLS) team, than winning a dozen World Cups.

It’s not that they wouldn’t love a dozen World Cups. They want that, too. But, in their homeland of Mexico, sports are inexplicably tied to education and giving back to the community. Passion for one fuels passion for the other, and they wouldn’t have it any other way.

Now in its eighth season, Club Deportivo Chivas USA is the only Mexican-owned team in United States professional sports. The idea began when Cué decided he wanted to move to the United States and take on a new challenge. “Chivas, which Jorge owns, is the most recognized soccer brand both in Mexico and the US, and the natural country to expand to after Mexico was the US because of its proximity, he says. “So, we got together and decided the timing and opportunity were right for creating a soccer club and starting a new legacy in the US.”

On August 2, 2004, Vergara and Cué announced they had been awarded MLS’ 11th franchise. Since then, the club has made great strides, including making the play-offs in four out of seven seasons. Today, Chivas USA has fans all over the country and it connects with them through Facebook, Twitter, and e-mail. “We have more than 50,000 fans between Facebook and Twitter,” Cué says. “We are in communication with them almost daily, even off season.”

But, the team is equally proud of its achievements outside the stadium. In addition to reaching up to 26,000 fans at the stadium 16 times a year, Chivas USA conducts 500 local events for children annually. Through its Kick-it at the Park program, “we bring our coaches to Los Angeles parks and about 1,000 kids each get a 45-minute clinic,” Cué says. “But, they’re not just learning about soccer. They’re learning how to communicate, work as a team, and integrate with the community.” Chivas USA is also involved in a reading program. “We bring the players to schools and sit and read a book together; we teach them that reading is fun.”

And if that isn’t enough, Chivas USA operates Fundación Chivas de Corazon USA (Chivas Heart Foundation), which runs HEART Soccer Camps for special needs kids, donates to cancer eradication efforts and offers the Chivas Kids program, which allows close to 40,000 underprivileged children to attend Chivas USA home games every year. “I believe our foundation is one of the most passionate things we have,” Cué says. “We try to care more about the community than anything else. The foundation has given us a tremendous opportunity to reach out to kids and give them a lifestyle they might not normally have.”

Something else that sets Chivas USA apart from other teams is its commitment to nurturing youth through its Player Development Program. “This is a heritage we got from the Guadalajara team,” Cué says. “We believe it’s the most long-term, sustainable way of doing business. We have very aggressive soccer academies and youth programs that we subsidize as a team and invest in these players. That’s one reason we are excited to be in LA, because there is a huge pool of up-and-coming talent here.” 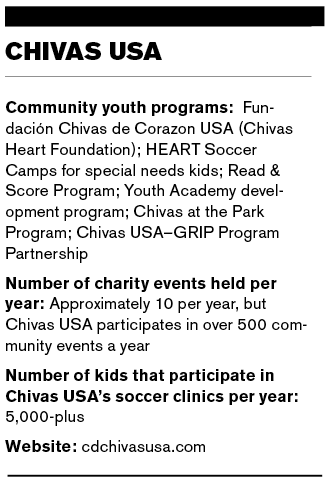 With seven years under its belt, Cué says the key to success lies in patience. “People want results overnight, and they think you’re going to win right out of the gate. We’ve learned a lot over the last seven years, such as the importance of building a solid foundation, and we’re committed to the long term.” Over the next few years, Cué and Vergara are in discussions about building Chivas USA its own stadium (they currently play out of a rented stadium). “Launching a new home offers a great opportunity to bring new things to the fan base,” he says. “We always have to be thinking about the fans and how to improve their experience.”

In the end, the team is about more than just winning games. “Sports provide a tremendous opportunity to keep kids away from drugs, out of trouble, and physically healthy,” Cué says. And that, he says, is Chivas USA’s single most important goal.