Hispanic homeownership is poised to explode. Century 21’s diversity guru, Carmen Mercado, explains why everyone will benefit when it does

Carmen Mercado once thought she could never own a house. When she finally realized her dream of being a homeowner, she also realized her career path.

Born in New York, Mercado moved with her parents to Puerto Rico when she was 11 years old. When she became a single mom at a young age, she felt the urge to move “home” again. Eight years later and pregnant with her second daughter, she settled permanently in New York with her husband. 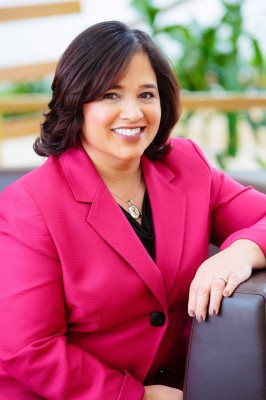 “When my husband and I came back to New York in 1995, we lived temporarily with my sister who had bought a house in Levittown, Long Island,” recalls Mercado, now 47. “When we were looking to move out after about three months, we were planning on renting because we didn’t think at that time that we would be able to purchase a property. But my sister kept on nudging us. She kept saying, ‘Don’t rent. Look for a house. It’s affordable. You’ll be able to do it.’ So I thought, ‘OK. Let’s call a real estate agent.’”

Much to Mercado’s surprise, her sister was right. They could afford it. In fact, it was such a good investment that in 1997, when Mercado was expecting her third child, they were able to sell their first home in order to buy their second.
With the new house, Mercado also found a new career. “When we bought our first home, I thought, ‘I kind of like this,’” she says. “After I purchased my second home, I started doing some research to find out what a career in real estate would look like.”

Soon after obtaining her real estate license in 2002, Mercado got involved with the National Association of Hispanic Real Estate Professionals (NAHREP). “I was intrigued by their mission,” she says, “which is to increase sustainable homeownership in the Latino community.” She went to meetings, immersed herself in their pursuit, and was elected national president of NAHREP from 2011 to 2012.

Her leadership roll at NAHREP introduced Mercado to senior leaders throughout the real estate industry, including Century 21 president and CEO Rick Davidson, who hired her in 2012 as director of national recruiting. Now, as national director of diversity and strategic growth, Mercado is leveraging her own experience as a Latina home-buyer to increase homeownership in the Hispanic community at large.

For individuals and families, home ownership is both personally and financially rewarding. “Owning your own home gives you a sense of self-worth,” says Mercado. “It’s a stake in the ground and a way to become part of the fabric of your community.” Not forgetting the longevity of the investment, Mercado says even with the ups and downs in the market, over the long term, buyers eventually see the benefits of having equity. “In my particular situation,” she says, “I was able to finance most of my daughter’s college tuition with that equity.”

For Hispanics especially, homeownership fosters the importance of family. “As it is often said, family is an extremely vital aspect of the Hispanic culture,” says Mercado. In fact, she has noticed a unique trend driving Hispanic homeownership: more Latinas are working, which has caused more Hispanic families—including her own—to form multigenerational households. “Owning your home means having the freedom to open your doors to family without hesitation.”
Hispanic homeownership is equally beneficial at the macro level. “Hispanic homeowners are typically rooted in community. They’re very loyal, for instance, to small businesses,” Mercado says. “The Hispanic community always wants to give back and get involved, whether it’s at school or through fund-raisers for great causes. A community of primarily homeowners, versus renters, is going to see the benefits of those commitments.”

Despite its obvious benefits, homeownership remains elusive for many Hispanic families. One reason could be age. “What’s unique about the Latino community is that, generally speaking, we are a younger population than non-Hispanics,” Mercado says of the community’s relative youth, which can sometimes be an obstacle to homeownership. “Our household formation often starts at a younger age, so many Hispanics are forming households when they’re also starting their careers, maybe in an entry-level position. They have fewer years of established credit history because of that.”

For young Hispanics who want to buy a home, and likewise for their older relatives, many of whom may be immigrants, a lack of credit and employment histories can make traditional barriers to entry—including down payments and mortgage underwriting guidelines—that much more challenging.

And yet, homeownership today is more attainable than ever before. “[Housing prices] are still very affordable in comparison to the height of the market,” argues Mercado. “That, combined with low interest rates, makes this, historically speaking, the best time to buy.”

Which begs the question: how do we bridge the gap between challenges and opportunities?
Hispanic brokers and agents could be the key. “If you look at the National Association of Realtors 2013 member profile, you will see that roughly five percent of its members are Hispanic,” says Mercado. “That gives a clear picture of opportunity rates.” Home buyers and sellers want to work with a professional who understands them. For that reason, she concludes, “Having Hispanic brokers and agents who connect to the culture and live in the community will undoubtedly move our industry forward.”

A Master of Facts