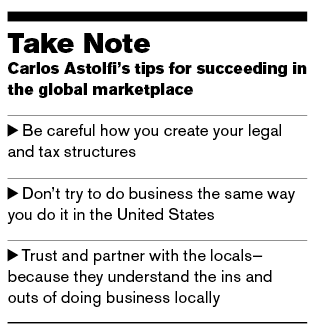 Carlos Astolfi, senior vice president of finance and administration for Turner Broadcasting System, Inc. in Latin America, was born to bridge cultures. “My father always envisioned a global economy, so he got my four brothers and me in bilingual schools and was always encouraging us to learn about other cultures,” Astolfi explains. “And because I [was born] in Pittsburgh to Argentine parents, who relocated to Buenos Aries when I was a year old, I have both US and Argentine experiences.”

Astolfi spent the first half of his life in Argentina, attending the Universidad de Belgrano and was certified as a CPA [Certified Public Accountant] while working for a small accounting firm. “There were no computers so we did the books by hand,” recalls Astolfi, who later joined Arthur Anderson, eventually taking his accounting expertise to one of the world’s leading manufacturers, Siderca.

In 1989, when the Argentine currency crisis struck, Astolfi began what would be his second career, moving to the United States and joining a US flower distributor that wanted to integrate its business vertically by investing in farms in South America. “In helping them set up the structure in Latin America, I found my niche,” Astolfi says. “I basically help US and European companies do business in Latin America.”

Since then, Astolfi has wavered from that focus, but eventually found his way into broadcasting. From 1994 to 1996, Astolfi worked for Telemundo in Miami, but left to work for a firm in another industry. When Turning Broadcasting—a subsidiary of Time Warner that is a leading operator of cable TV networks, including TNT, TBS, and CNN—recruited him in 1998, he jumped at the opportunity. “I knew I wanted to work in the media industry again,” he says. “And Turner didn’t have much experience in Latin America, so I knew I’d be able to help.”

Today, Astolfi handles budgets, accounting, taxes, and office administration throughout Turner’s Latin American offices. The company operates in Argentina, Chile, Brazil, Mexico, Colombia, Venezuela, and Panama, but sells a signal to every Latin American country, a total of 28. Handling finances in so many jurisdictions, Astolfi says, can get complicated. “The most common mistake of US companies is doing business in Latin America like they do at home … You need to understand how business is done in each country,” he says.

Some of the rules may seem obvious: Different countries have different business and tax laws that must be accommodated. Other rules are more nuanced. “As a gringo you probably won’t get the best deal, so you have to trust the locals,” he says. But, perhaps the most important rule is to know when to get in and when to get out. “Latin America contains a number of volatile and cyclical markets, so you have to have the timing right,” he explains, pointing to the Argentine currency crisis of 2002 as an example. “People were panicking in the streets because of the currency devaluation, but we stayed calm, and were able to see an opportunity,” he says. “We invested, acquiring a number of networks, and that investment paid off significantly because we got in when assets were cheap in US-dollar terms.”

Thanks in part to Astolfi’s help, Turner Broadcasting now has 16 different networks in Latin American, more than it has in the United States. As a result, Astolfi spends much of his time traveling between Latin American offices, throughout which he oversees 140 employees for a $750 million organization that has grown extensively in the past few years. “We recently acquired Chilevisión, so I’m spending a lot of time in Chile these days,” Astolfi says. “But, I love it because it allows me to make a difference in a US company’s Latin American business.”