Headquartered in Stamford, Connecticut, Suzette Recinos has ample opportunities to apply her language skills on an international scale. Her role as chief counsel, DMT [Document Messaging Technologies] and Latin America at Pitney Bowes Inc. takes her on frequent business trips to Brazil, Mexico, and Puerto Rico. Her current job position isn’t the first time that Recinos has been exposed to international cultures. Born and raised in Iowa City, Iowa, she got married after graduating from the University of Iowa, and spent the next seven years living in a variety of cities in Italy and France with her husband.

“After living abroad for seven years, I enjoyed meeting people from diverse cultures,” Recinos says. Eventually, Recinos returned to the United States and completed law school. The single mother of three children accepted a job as an associate at a law firm in Florida, where she completed venture-capital work and merger and acquisitions. “I had great exposure to Latin America while working at the Florida law firm, where I had the opportunity to work directly with clients, acquire drafting and negotiating skills, and generate my own clients,” Recinos recalls. “A combination of these skills helped me become a good leader and a good candidate for an in-house position.”

In 2003, Recinos met her current husband and her family expanded to include two more children. She relocated to Stamford, Connecticut and began commuting to her law firm’s New York location. When she discovered an in-house job opening at Pitney Bowes (PB), supporting Canada and Latin America, she was immediately intrigued. Also, PB is headquartered in Stamford, which allows Recinos a more flexible schedule. “With my in-house position, I work long hours and busy days, but I return home and have dinner with my children each night. I have greater control over my schedule.” Of course, having a supportive spouse is helpful, as well. 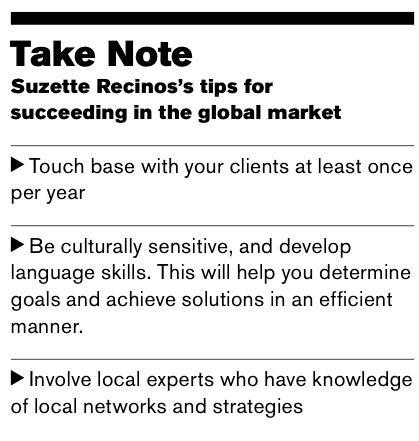 During her global travels, Recinos visits each of her businesses once per year. In 2011, she participated in mediation proceedings that took her to Mexico several times. Preferring to travel with companions, Recinos coordinates her itinerary with her clients and colleagues. “Traveling with senior-management executives is informative from a legal and business standpoint because they have presentations prepared for our clients to educate them about the Pitney Bowes business.”

Recinos emphasizes the importance of touching base with international clients on an annual basis. “The day or two that you spend with your client is more valuable than an entire year of phone calls,” she says. “Face-to-face interaction requires trust both ways, creating relationships that often preempt legal issues.” Also, before traveling she frequently reaches out to local counsel to discuss logistics to further maximize the business value of the trip.

Excelling beyond the scope of her job requirements, Recinos serves as head of Pitney Bowes’ diversity committee. “We visit our supplier law firms and ensure that each has goals and results with respect to diversity initiatives,” Recinos explains. “We want to not only achieve raw numbers, but also have conversations about initiatives, and we conduct one-on-one interviews with associates to gain their perspectives.” Although the diversity committee traditionally focuses on its law-firm suppliers, currently it’s branching out to address internal employees. “We work with a diversity expert on a company-wide level to promote a feeling of inclusion for all our employees,” Recinos says.

The daughter of Guatemalan natives, Recinos serves as a mentor to law students and is head of the international committee for the Hispanic National Bar Association. “My Guatemalan parents [instilled] such a strong work ethic and sense of accountability in me,” Recinos says. “Giving back is not only a nice act, but it’s required.” Citing international travel and applying language skills as her favorite aspects about her job, Recinos also instills these values in her own children. “I tell my kids all the time that language skills are becoming increasingly important as business continues to globalize.”

Food for thought with Susan Santiago of Hyatt Hotels Corporation