When Anthony Perez began working for Bank of America in 1995, he never thought he’d eventually be responsible for the day-to-day management of the real estate the bank owns, leases, and occupies in its world headquarter city of Charlotte, North Carolina—some eight million square feet, which makes the bank the largest landlord and tenant in the state’s Mecklenburg County. Somehow, though, it just happened. “When you succeed at the bank, you gain opportunities to do more and more things,” says Perez. As a result of those opportunities, today Perez is Charlotte region property executive, and he loves what he does, as it provides him with variety. Here, Perez tells us about three of the more notable projects he’s worked on.

1. Orchestrating a Corporate Rebranding
In 1998, Bank of America was acquired by Charlotte-based NationsBank, resulting in one of the largest corporate brand changes in history, according to Perez. His team, which consisted of 10 employees and five major vendors, was responsible for changing 45,000 signs in 19 states, as all of the NationsBank signs needed to be replaced and Bank of America signs needed to be rebranded. The project took 19 months, and involved the launch of an entire business. “We made a commitment to spend at least 20 percent of our operating budget on minority vendors, so we developed new relationships with some capable individuals and helped build their small businesses,” says Perez.

2. Building a LEED-Certified Ritz-Carlton
In addition to the typical office space and banking centers, Perez and his team also manage some unique properties, such as a Ritz-Carlton hotel. In 2010, the bank decided to build Charlotte’s first five-star hotel to accommodate customers, associates, and the community. Perez supervised the opening of the 147-room hotel, which is operated by Ritz-Carlton, and is responsible for its ongoing management. The project, he says, presented a number of challenges: It was built on a small piece of land, and was the first Ritz-Carlton in the nation certified under Leadership in Energy and Environmental Design (LEED). “Ritz-Carlton had never built a LEED hotel, but most of our new facilities, from new construction to interior renovations, are LEED certified,” says Perez, noting that the hotel achieved the Gold level of LEED. 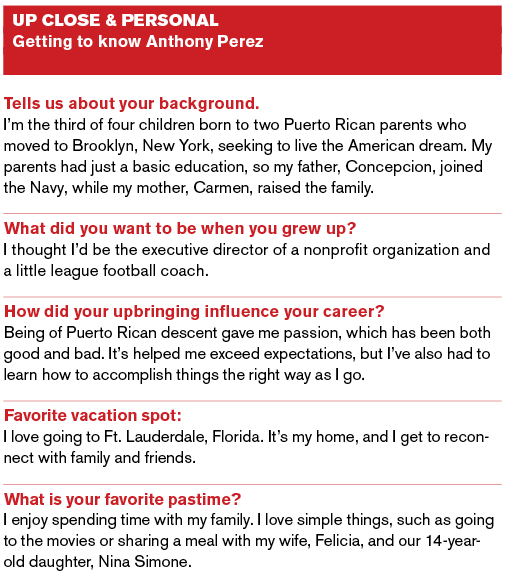 Deanna Salazar Is Dedicated to Service

3. Managing Impact of Democratic National Convention
The Democratic National Convention, which will take place in Charlotte in September 2012, will bring 50,000 visitors—including the White House staff, members of the US Congress, and numerous protestors—to Charlotte, which already has a population of 1.8 million. Most events will take place in the Time Warner Cable Arena, an entertainment and sports venue located in the center of the city. That arena, however, is surrounded by buildings Bank of America occupies or leases. “We want to ensure that we can still conduct business during the convention,” says Perez.

The Art of Communication