Although the energy workforce is aging, attorney Alejandro “Alex” Cestero of Weatherford International represents a new generation of leadership 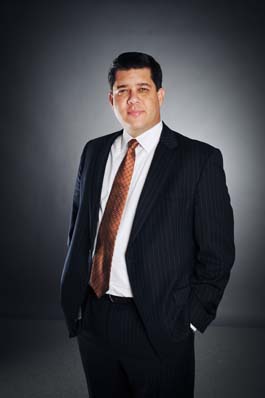 When they say “everything’s bigger in Texas,” Texans aren’t just talking about steaks, snakes, hats, and hairdos. They’re also talking about business. In particular, oil fields and energy companies. In fact, Texas is the nation’s leading producer of crude oil, natural gas, and wind power. Furthermore, its largest city—Houston—is home to more Fortune 500 companies than any other US city, save New York.

All this makes it the perfect habitat for Alejandro “Alex” Cestero, vice president and cogeneral counsel at oilfield services company Weatherford International, which operates in more than 100 countries and employs more than 70,000 people worldwide.

Although he was born in Puerto Rico and grew up on the East Coast, Cestero has spent his entire legal career in the Texas energy sector. Prior to joining Weatherford in July of 2013, he was vice president, general counsel, secretary, and chief compliance officer for Lufkin Industries, where he was reportedly the youngest executive officer in the company’s 111-year history. Now 38 years old, he’s one in a new generation of energy executives that will take the reigns when the industry’s aging c-suite retires. Here are four of Cestero’s proudest achievements, the sum of which make him a rising star in law and energy alike.

Cestero became interested in the law at an early age when he was exposed to it by two lawyer uncles—one, in particular, who was a US Air Force reservist serving in the Judge Advocate General’s Corps (JAG).

“He was always flying to South America, going to different countries to work on international public-law issues. I thought that was exciting,” recalls Cestero, who has a law degree from Stanford Law School. “Coming out of high school I was fully committed to becoming a lawyer. I just didn’t know what kind yet.”

Inspired by his uncles, Cestero—whose father was an actor and mother a marketing executive—ultimately gravitated toward international and business law, securing his first job in the business and international section of Houston-based law firm Vinson & Elkins. There, he committed to a specialty in multinational contract and transactional law, which has since taken him on business to more than 60 countries.

That specialty served Cestero especially well during his eight years at Pride International, a Houston-based oil/gas driller that merged with Ensco in 2011. In 2007, he was deputy general counsel and assistant secretary when the company completed a three-year effort to divest its noncore assets—including its Latin America land division, which it sold under Cestero’s direction for $1 billion cash.

“It was right before the recession happened, so in hindsight it was a very timely and very profitable deal,” says Cestero, who emerged from the transaction with a new set of valuable project-management skills. “We were auctioning off the business to multiple parties while at the same time trying to keep the revenues stable and the workforce motivated, even though they knew they were being sold.”

It wasn’t an easy transaction. It was, however, a memorable one. “In our sector, no deal of that type and size had been done before,” Cestero says.

One of the last assets that Pride divested itself of was its offshore drilling business in the Gulf of Mexico, which was spun-off into its own, independent company, Seahawk Drilling Inc., in 2009. Cestero was offered the position of senior vice president, general counsel, corporate secretary, and chief compliance officer at the new company.

“It was my first standalone public-company officer role,” says Cestero, who considers the appointment—not to mention the spin-off transaction itself, which he helped manage—one of his most significant achievements. “It was like an IPO; we brought in a new CEO and a new CFO, set up policies and procedures, and built back-office support from the ground up.”

Separating from Pride and creating a new company took almost a year, during which time Cestero not only managed the legal volleying with Seahawk’s former parent company, but also participated actively in c-level discussions about everything from branding to business processes to staffing. It was serendipitous, as he’d completed an MBA at Rice University a year prior, intending to explore new opportunities on the business side of the energy sector.

“[Energy] is an industry where you don’t see a lot of lawyers crossing over [to the business side],” Cestero says, “but I’ve been lucky in my career to have been afforded many opportunities to go play outside the lawyer box.”

If you weren’t a lawyer, what would you be? A professional hunter or basketball player. I have become a near hunting addict in the last 15-plus years in Texas and married into a hunting family. As for basketball, I can still drain it from long range, but I knew I wouldn’t have a great chance to play center in the NBA at 6’4”.

What do you do to relax and unwind? Hunt, read historical fiction, occasionally golf, see lots of movies, and play video games with my kids.

What’s something people would be surprised to learn about you? I played on some select baseball teams during junior high school in Miami and was on the same team as Alex Rodriguez of the New York Yankees.

What would you eat for your last meal? Arroz con gandules and tostones made by my mom, with coconut ice cream and a malta to drink.

Although starting Seahawk was a big accomplishment, ending it was even bigger, according to Cestero. “We were poised for growth,” he recalls. “We were in the middle of looking at strategic acquisitions in spring 2010 when the [Deepwater Horizon] oil spill happened in the Gulf of Mexico. After that, the US stopped issuing drilling permits to our customers. Basically, the whole Gulf of Mexico—which is where all our rigs were—was shut down, so we lost 90 percent of our revenue overnight.”

It would have been a nightmare scenario for any company. For a start-up, however, it was disastrous. “The company ended up going essentially illiquid. We didn’t have any debt, but we didn’t have much revenue, either. So we had to go through a very careful strategic project to market our company for sale,” continues Cestero, who upon finding a buyer for Seahawk’s assets took great care to structure an advantageous deal, concluded in 2011 through a bankruptcy filing and debtor-in-possession financing. “Picture Capt. ‘Sully’ Sullenberger, who did a safe crash landing on the Hudson River [in 2009]. That’s what this deal ended up being. It was a very well done transaction that maintained the highest value for the company and stakeholders.”

4. The Deal of a Lifetime

Its urgency and finesse made Seahawk’s distressed sale an impressive transaction. Cestero’s most beloved deal, however, came two years later at Lufkin, one of the country’s oldest oil-field-equipment companies.

When they recruited Cestero in 2011, Lufkin’s executives had no intention of selling the company. Then, GE called.

“We were not looking to sell the company, but then GE came to us with a very big check,” says Cestero, who led negotiations on behalf of Lufkin. “Being bought by GE is different than any other deal, just given their size; their deal team outnumbered ours 10 to one.”

And yet, the sale—for a reported $3.3 billion, making it one of the highest-valued sales in the history of the oil-field-services sector—was remarkably smooth. “It was the smoothest, quietest, least problematic M&A transaction I’ve ever been involved with,” Cestero says. “It went like clockwork, and that’s unique. It was one of the deals of the year in the Texas energy market.”

For Cestero—David, who now has experience negotiating with Goliath—it wasn’t just the deal of the year. It was the deal of a lifetime, as it caught the attention of his current employer, Weatherford, where he looks forward to a slew of new opportunities in areas as diverse as traditional legal, risk management, and government affairs.

“As you get into a larger organization like Weatherford, you have more chances and more flexibility than you would at a small organization to influence other areas of the business, outside of being a pure lawyer,” says Cestero, who officially joined Weatherford in July 2013. “I’m joining the company at a really interesting time in its history, so things couldn’t have worked out any better.”

At Bank of America, Andy Velez Levels the Playing Field

Genaro Perez Jr. Knows His Network (and How to Use It)