The third invite-only Uniting Powerful Leaders VIP dinner event of 2015 was held at El Chorro Restaurant—a beautiful and expansive hacienda-like restaurant in the paradise valley hills of Phoenix—on September 30, 2015. The intimate dinner was held in partnership with Northwestern Mutual, which launched the 2015 dinner series in San Antonio and then in Chicago this year. The private gathering brought together distinguished leaders who have been profiled in the pages of Hispanic Executive, as well as notable regional Latino executives in a union that celebrates the power of the Hispanic business community and its leadership.

Lee Patterson, Managing Director for the Northwestern Mutual office in Phoenix welcomed the guests and introduced Managing editor of Hispanic Executive, KC Caldwell, who then recognized September/October cover story, Javier Palomarez, with a toast. “With an open heart and mind, Javier Palomarez connects his community, not just the 4.1 million USHCC members, but the entire Latino community to Washington to encourage open dialogue with those in political power” she said. “In questioning the 2016 presidential candidates, Palomarez encourages a greater understanding among the candidates of the issues important to our community and a greater understanding among our community of the platforms the candidates represent. His honest, clear, thoughtful, and effective approach could not come at a more pivotal time. His influence and impact will only continue to grow.”

The guest of honor, Javier Palomarez, spoke to the attendees before the start of dinner. “As corporate executives and business leaders,” Palomarez said, “one reality is clear: the Hispanic community has become a defining feature of the changing face of America.”

He then proceeded to illustrate the following facts, bringing to light the growing U.S. Hispanic population’s ability to determine the course of our nation’s economic, social and political future.

“In fact, in this very room, there is a constellation of rising stars in the Hispanic community,” concluded Palomarez. “Together, let’s continue to serve our companies, communities, and our country. Let us follow Hispanic Executive’s example and recommit ourselves today—and every day—to the common cause of building a brighter American future by uniting as a community.”

The next Uniting Powerful Leaders dinner will be held in Los Angeles on November 11, 2015 in recognition of its 2015 Top 10 Lideres. All photos by Elaine Kessler. 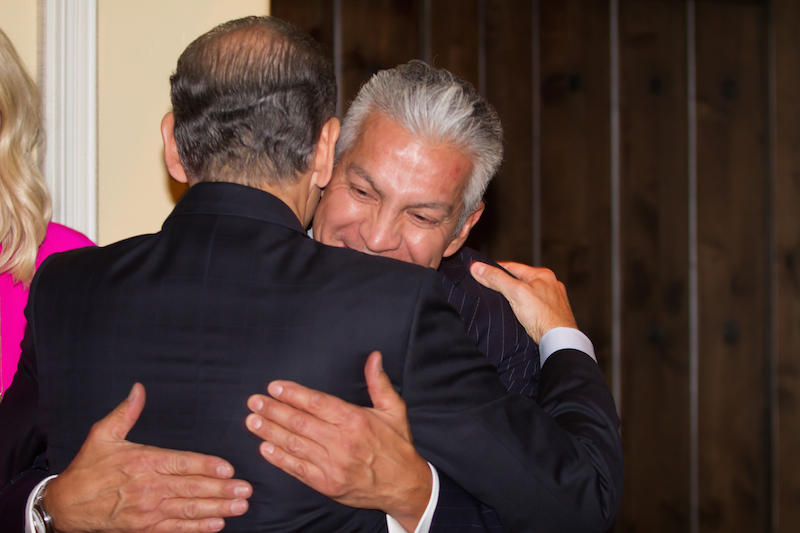 Is Javier Palomarez the Most Influential Man in American Politics?

We must work with, and across, Human Differences