Miguel Chavez immigrated to America for a dollar. Not to make money, but for an actual dollar bill. It was 1967 and the 21-year-old needed a bit for his donkey. Back then bits cost 12 pesos, about one dollar, and he didn’t have money. But he had seen well-dressed Mexicans stroll through his small town who had been to this wondrous place called the United States. His path was set.

Thirty-two years after climbing into a secret compartment of a coyote’s truck and illegally emmigrating to California, Miguel owned a 300-acre strawberry farm and employed more than 400 seasonal pickers. Today his family owns an agriculture-cooling operation in Santa Maria, California, which cools up to 90,000 packages of strawberries a day in peak season. 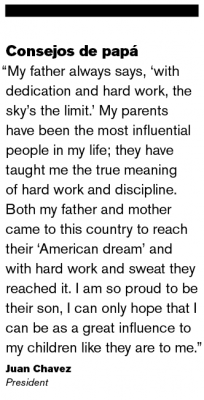 So, how did this man who could not read or write manage to trade his burro for a Bentley? Chavez’s success is an inspiring story of a father’s dedication to his family and a work ethic so strong it overshadowed all obstacles including poverty, discrimination, and fear. “I never went to school, I didn’t know how to read or write,” says Miguel in Spanish, his daughter-in-law Alejandra interpreting for him. “I didn’t know English but I’ve always been a thinker and I always think ahead, I always thought of my family, I always wanted more for their future.”

Miguel’s first job in the US was picking strawberries. He was so proficient at it, a “hippy” coworker got angry and reported Miguel as illegal and he was deported. He came back and worked various jobs from fruit picker, broccoli-sprinkler operator, and landscaper, whatever job he could get. “One day I was picking strawberries and I looked up the hill and I saw an inspector drive up in a brand new green Chevy and I thought, ‘I want one of those.’” Miguel says. He received amnesty in 1974 and in 1976, when he got married; Miguel began thinking seriously about his future.

By that time he had worked so hard he hurt his back. His wife Alicia worked enough for both of them, picking strawberries in the morning and working a second shift processing them at night. Miguel received a $5,000 workers’ compensation check for the back injury and bought his new family a home. When his wife became pregnant he decided he needed a more permanent solution to his money problems. “I wanted something more,” Miguel says. “I never looked for any kind of help; I couldn’t get any help from anyone. I knew I needed to work hard.”

So Miguel leased three acres of farm land from a relative and began growing strawberries on his own. With his wife’s help—the day before she gave birth to their son, Juan, she picked 34 boxes of strawberries—he built a business. He carried little debt, always paid creditors early and never strayed from his core business. His son took note of his father’s business acumen but noticed something else: “My parents always worked,” he says. “There was little time for me because they always came home from work stressed or tired.”

Even so, when Juan graduated from high school, he did one year at a community college before the inevitable. “All I knew growing up was strawberries,” he says. “I never really had other aspirations to do anything else … I am the only son, if not me who?” In 2000, Miguel became president and CEO of state-of-the-art cooling facility for fruits and vegetables, MJA Cooling, Inc., (each letter standing for their names Miguel, Juan, Alicia) and Juan became vice president. Currently, Miguel leases most of his land to other farmers who cool their product before shipping it nationwide. The result is a business that always wins, no matter the weather.

At age 36, Juan owns his own strawberry farm and runs the day-to-day operations for the cooling company. “There are many coolers in this area,” Juan says. “But all we can do is continue to work with respect and truth and provide the best service that we can to all our shippers.” Going into the family business became just as expected of his wife, Alejandra. “I work for my husband and my father-in-law and it has its advantages and disadvantages,” says Alejandra, the company’s CFO, “but it’s awesome for my kids … We see each other every day. We have such unity as a family.”

At age 65, Miguel gets up on the tractor because he wants to, not because he has to. And as he looks over the 60 or so acres of strawberry fields he and his son farm he can’t help but shake his head in disbelief. Hard work and family truly is an amazing formula for success.

“You have to be willing to pay your dues. A lot of what we do requires getting dirty.”