A move to New York and a long résumé helped Saul Torres refine his passion, but the Lone Star State was always on the horizon. Now he’s back in Dallas, thriving in the collaborative environment of RSW 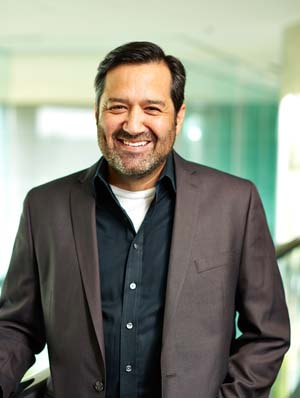 Saul Torres started his career designing logos for American Airlines and ads for Newsweek. While he was on the fast-track to the top, Torres grew frustrated with the lack of creativity as he got promoted to a management position, and he left Texas in a risky move that brought him to Manhattan and back again. The atypical journey has educated and influenced him in major ways.

1988-1992
Although the recession made 1988 a difficult year for job seekers, Torres graduated from Texas Christian University after completing four internships. As a graduate, he was so excited about his first job offer that he accepted the position without knowing the salary, and he found himself working for a Dallas graphic design firm working with clients like American Airlines and Newsweek. The work was challenging and competitive, often forcing Torres to log 60–70 hours per week, which he did for four years. He received promotions along the way, and in 1992 found himself growing weary of management positions. “I was 25 years old and realized I was spending most of my time hiring, managing, and firing people,” he explains. “I’d gotten away from creativity, which is the thing that I love.” Feeling the need to reconnect with his passion, Torres decided it was time to move on.

1993-1996
While Torres did not have any leads or job opportunities, he did have a friend in Brooklyn. Determined to succeed on the strength of his passion and portfolio, he sold everything, pocketed a few hundred dollars, and headed out East. His strategy? To cold call reputable firms and ask for feedback on his work. “I don’t know if it was crazy or stupid, but it worked,” he remarks. Torres lined up several meetings, and though he was well received, most firms weren’t hiring. Still, he remained diligent, asking for referrals, until one meeting an executive offered to connect him with a small cable network known as Comedy Central.

The fledgling network, owned by Viacom, decided to launch an in-house creative department. Torres became its first employee and received the keys to the kingdom. “There was nothing in place,” he says. “I got to make the rules, order the computers, decide how much time to devote to each project, and choose how things should look. It was a total clean slate.”

Best of all, he finally had a chance to reconnect with creativity, as upper management encouraged Torres to have fun and be funny. One of his most memorable projects was a viewing room on the third floor of the Empire State Building. Comedy Central built the space to entertain tourists waiting in line for a flight simulator attraction. Torres designed the living-room sized space with murals that replicated a bird’s-eye view of the city. The rooftops featured TV monitors broadcasting Comedy Central’s line-up of emerging comedians telling jokes about New York. The style, content, and technology were cutting edge in the mid ’90s. “It was an innovative project and a rewarding one for me because thousands of people experienced the room each year,” Torres says.

A few years later, Viacom fired several Comedy Central executives and brought in MTV managers to run the comedy station. “What felt like a summer camp started to feel like a corporation again,” Torres says. “I decided to leave.” Two weeks later, the station launched South Park and The Daily Show, but Torres was already committed to a new path—it was time to settle down and return home to start a family.

1997-2006
Torres returned to Dallas and found that his New York risk had paid off, as companies were impressed by his experience and quick to make job offers. He accepted a position at The Richards Group, America’s largest independently owned ad agency. There, he led a creative team and worked on accounts for Greyhound Lines, Dr. Pepper, and Home Depot. Lured by the dot-com boom, Torres launched Torres Creative in 1999. The business started well and even survived the hard landscape of 2001; but after seven years, Torres learned something important about himself: he thrived more in a creative role than in an ownership position. Again, he knew it was time to move on.

2007-Now
Driven by a desire to focus on his true strength, Torres called a friend and owner of a local shop known as RSW. A conversation led to a job offer as creative director, which Torres accepted. Now, as vice president of creative services, Torres again leads a creative team and specializes in strategic communications for high-profile brands. His group is focused on internal employees instead of consumers. They develop materials aimed at Hilton Worldwide’s 175,000 employees and HP’s many employees around the globe. These campaigns—often translated in many languages and displayed in dozens of countries—can last up to 18 months.
Now back atop the Dallas ad world, Torres remembers fondly his Eastern adventures and credits his openness to risk taking and his time in New York for much of his success. Another factor behind his accomplishments, Torres says, is an encouraging family. “I expressed an interest in art at a very young age, and both of my parents pushed me to pursue it,” he explains. His parents—immigrants with limited access to traditional schooling—valued education and understood that kids should be inspired, encouraged, and motivated. “My parents taught me to want more,” Torres says. “They made me believe that I could do whatever I wanted.”

Jose Luis Prado Is Right Where He Wants to Be