When Mike Mateo took charge of Diebold, Incorporated’s Latin America operation in 2004, he had little experience in that part of the world. Less than a decade later, he has overseen growth in the business from 600 to 2,500 employees,─a transition that he finds profound. “This division’s growth is a reflection of our commitment to serving our customers and generating value for our shareholders,” says Mateo. “We’ve provided individuals in the emerging markets with opportunities for employment and career development.”

Diebold, headquartered in Canton, Ohio, began in 1859 as a manufacturer of safes and vaults, one of which survived the Great Chicago Fire of 1871. In the 1970s, Diebold began selling and maintaining ATMs and security products, including cameras, CCTVs, alarms, and access control systems. Today, the company is known for its integrated service offerings—handling everything from the sale of products to installation, maintenance, and financing. With a total reported revenue of $2.8 billion (in 2011), Diebold employs roughly 17,000 employees in more than 90 countries.

Mateo, who joined Diebold in 1980, spent most of his career working in various capacities, including service and sales-management roles in the United States. When the opportunity to work in the Latin America division arose, he was hesitant to make the move. “It was quite a decision for me because I knew little about the Latin America market other than a few years I spent working in the Caribbean,” he explains. “But, I felt the opportunity would take me back to my Latin roots and would present me with an opportunity to grow.” Mateo was born in Puerto Rico and he grew up in Brooklyn, New York City. After serving three years in the Marine Corps, Mike attended Fairleigh Dickinson University in Teaneck, New Jersey, while working for various companies.

Today, Mateo is responsible for leading and growing Diebold’s Latin American business, which includes all Latin American countries except Brazil. There, says Mateo, the focus is to continue to provide the banking industry with solutions and transactions innovation and the integration of comprehensive security solutions for some of the more significant industries in the region, including mining, manufacturing, military facilities, as well as the company’s core market, the financial sector.

Advance deposit automation ATM solutions are in demand in Latin America, especially since only 30 percent of the population holds bank accounts, says Mateo. “Our automated self-service solutions allow the consumer to make deposits in a bundle and the machine counts the money and processes it,” he says. “On the business side, our strength is integration. Customers don’t always have the capital to finance an ATM network or a security system, so we can provide financing as well as installation and management,” says Mateo. 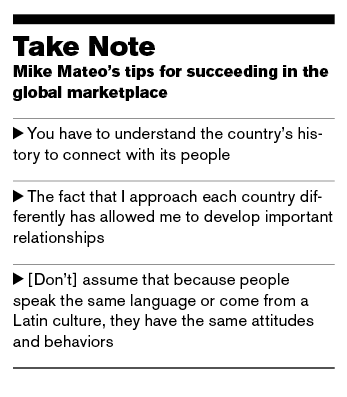 It’s a job Mateo is well suited to, given his roots. He notes, however, that a Spanish-speaking background doesn’t guarantee success in Latin America. “The challenge in Latin America is navigating the many political and economic situations the region faces,” he says. “You may think that if you speak Spanish and have some experience with a Latin culture that success would be easy, but every country is different. You have to be open to learning about the different cultures and connecting with the people.”

To that end, Mateo, who lives in Tampa, Florida, spends much of his time visiting the countries he serves. “I rack up close to 100,000 miles per year,” he says. He also focuses on hiring the right people. “In each country, we’re lucky to have smart and savvy general managers who know how to manage difficult situations and can deliver results,” he says. “I’ve also staffed Diebold’s Latin America headquarters in Tampa with associates from as many Latin American countries as possible. We currently have folks working in our Tampa headquarters office from Argentina, Colombia, Mexico, and Peru.”

That focus on employees, says Mateo, was an unexpected joy of the job. “Employment is often a struggle in the emerging markets, and we’ve provided people with an opportunity not just to work and provide for their families, but to develop their careers,” says Mateo, who hopes to maintain the same pace of growth for years to come. “By doing that, Diebold has been able to offer its customers a better experience and, in turn, provided value to our shareholders. I’m proud of the fact that we’ve accomplished so much because it means we’re doing something right.”