Like many high school graduates, Juanita Rodriguez just wanted a job. At first, she was a 19-year-old with a temp job at a large insurance firm. Six short months later, the Chicago native had been hired by the firm as executive assistant to a high-profile exec, translating sensitive legal documents and jetting off to Santiago, Chile, to further apply her Spanish-language skills in assisting the firm with a case of securities fraud.

Today, Rodriguez blends her legal prowess and business background as general counsel at BN Capital Holdings LLC (Bn2), a fast-paced start-up in Chicago that aims to be a diversified producer of renewable fuels and biochemicals, both domestically and internationally. Serving as Bn2’s one-person legal department, Rodriguez is essentially there to achieve balance—advising but not overwhelming the decision-making process. Decisions are made quickly at the firm, even before the risks and rewards are clear, and she admits that one of the bigger challenges is to know when to seek outside help and support while minimizing expense.

But the recipient of the 2012 Illinois Rising Star in Business Litigation didn’t come this far without “diligence, grit, passion, and a touch of pain.” Growing up in Humboldt Park, a Chicago neighborhood associated [at the time] with poverty, drug abuse, and gang violence, Rodriguez, of Puerto Rican descent, had seen enough injustice and realized that she did not have “to live the life I saw around me just because I was born into it.”

Diving into the legal and financial world as a teenager had whetted the appetite of the driven young woman, who resolved to go after a finance degree. She became the first in her family to attend college—even as she found herself a single mother, a status that she says is often stigmatized by society. These days, the attorney’s community-service efforts are focused on demonstrating that these women “are just as entitled as anyone else to have dreams and goals to work for while setting an example for their children. There is no reason for Latinas to restrict themselves to work within the confines of social or corporate barriers.” 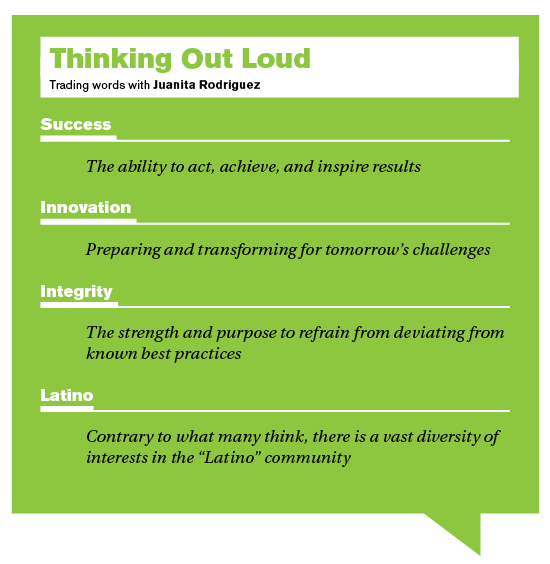 Finance degree in hand, Rodriguez had no plans to stop, knowing that a law degree would allow her to leverage her knowledge and make a difference in the everyday decisions shaping society.

With the help and encouragement of her Latina mentor, the young mother obtained financial aid that allowed her to continue with her law studies at DePaul University, passing the bar in 2005 and embarking upon her legal career. At law firm Johnson & Bell, where she worked for six years, Rodriguez says her boss also served as a strong mentor, teaching her the survival skills necessary to become a successful lawyer.

Although Rodriguez says she is always a litigator at heart, transitioning from private practice into the complex business operation of a start-up was not simple. She found it critical to be “a self-starter, willing to think independently and outside of the box and able to evolve. You have to be a good student as well as an engaging educator.”

To keep her litigation skills sharp, Rodriguez puts in time at private practice Velázquez Rodríguez LLC, where she is a cofounding partner. Here, she handles pro bono matters, serves former clients, and stays active with the bar and judiciary. And her long-held passion for the civil justice system may even put her on the path to serving as judge someday. Meanwhile, Rodriguez has learned to take the challenges of her career all in stride—literally. The attorney recharges and maintains a healthy balance between work and personal interests by dancing cha-cha and salsa and spending time with family and friends, traveling, working out, and “making a big mess in the kitchen.” “When [obstacles] come, I am prepared to handle them mentally and physically,” she declares.

Rodriguez advises young Latinos to be true themselves as they “will most likely face additional professional hurdles, and racial bias will never be eliminated.” But Rodriguez points out that despite all the odds, she has found ways to turn difficulties into opportunities and managed to open doors that have led her to success.