Carlos Lukac refers to himself as a “transformation specialist,” and for good reason. For 30 years, he has been working with companies that require a total overhaul. “When companies are in trouble, they find me,” he says. Lukac becomes the CEO of these organizations, many of which are in industries he has absolutely no experience in, and often in as little as 30 months, he’s completely turned them around. Then, he helps sell the company, or he leaves for another job.

This is how Lukac came to be CEO of Grupo Gayosso, Mexico’s largest provider of afterlife services. Lukac has been with Grupo Gayosso for just over a year now, and unlike many of the other companies he’s worked with, this one had incredible brand recognition as a result of its 138-year history—and in many ways, that was part of the problem. Grupo Gayosso was stuck in the past and operating like a small family business, despite servicing two-thirds of the country and having a nationwide network of 25 funeral homes, 21 cemeteries, 6 mausoleums, and 12 crematories.

“If you walk into the streets of Mexico and ask any random stranger what funeral home you should use or where you can find the place that provides the best burial services, 99 percent of them will tell you Grupo Gayosso,” Lukac says. “We’re talking about a company that has undeniable brand recognition in a country where honoring the dead is very prevalent. There are half a million people who visit our cemeteries for Día de los Muertos.” 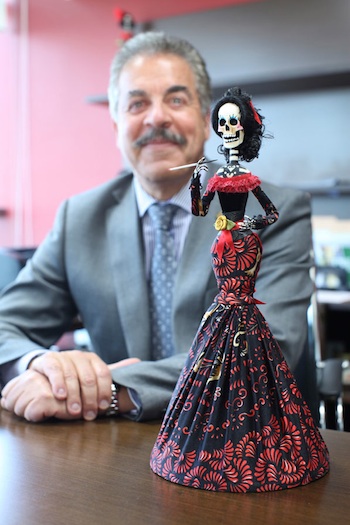 In some respects Grupo Gayosso has changed with the times. A descendent of the company’s original founder invented mausoleums with glass fronts, something Lukac believes was revolutionary. Also, cremation was previously considered taboo in Mexico—even by the company’s founders—but cremation services now account for 80 percent of the company’s business. Lukac’s greatest challenge, however, was truly bringing the company into the 21st century, and because he had no knowledge of the afterlife-services industry, he was able to provide fresh insights. Oddly enough, combining his inexperience with his keen business sense and capacity for true innovation resulted in great success for the company.

“It doesn’t matter what the business is or what industry it’s in, certain things need to be in place and I can ascertain what needs to shift by asking some very basic questions: What business are we in, what is it that we’re selling, where do we make the most money? It’s simple, but important,” Lukac says. “Then, I make myself more familiar with the specifics of the company, and in this case, the industry was very foreign to me. On my first day at the company I met with the senior staff and I was very honest. I said, ‘I don’t know anything. I don’t know how your industry works, and I’m going to ask you a lot of stupid questions. So teach me everything you can.’”

Patricia Arboleda Is on a Mission

Lukac discovered that many employees had been doing their jobs the same way for so long that they never stopped to question their processes or if there was a better, more efficient way to do things. This was the case with the payment option Grupo Gayosso used; clients were using coupon payment books, something that became popular when purchasing large appliances in the 1950s-era United States. Lukac completely did away with this option, instead enabling clients to pay with their debit and credit cards.

Another of Grupo Gayosso’s problems was that the company was still aggressively pushing burial products, despite the popularity of cremation services among the majority of its clients. Lukac remedied this by seeking out cutting-edge products that have received a positive response from clients, including ecologically sound urns. Now, instead of messily scattering ashes in the ocean, the ashes can be placed in an urn made entirely of salt that can be tossed in the water by the family. The urn floats until it begins to absorb water, and the family can then watch the urn make its slow descent before it dissolves entirely.

“The question for me was: how do you evolve when you happen to be in this very traditional industry? My goal was to be respectful and thoughtful while offering innovative products and services for a new generation,” Lukac says. “I think we’ve laid the groundwork for another 138 years of sustainable and profitable growth.”

Why Supplier Diversity Equals a Win-Win

Frank Carbajal Writes for the Future